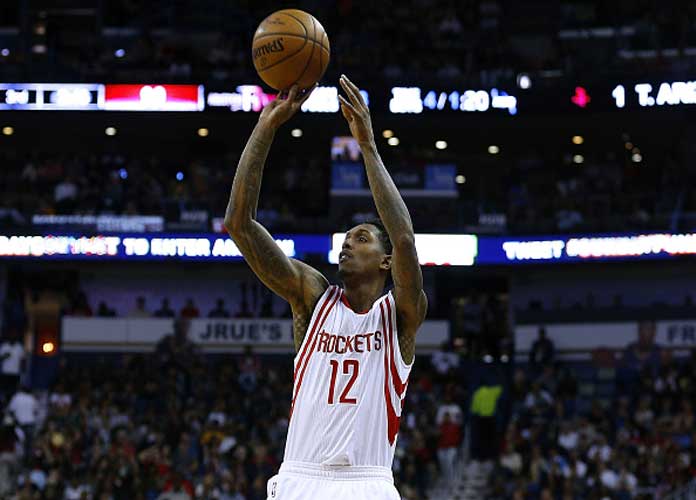 NEW ORLEANS, LA - FEBRUARY 23: Lou Williams #12 of the Houston Rockets shoots the ball during a game against the New Orleans Pelicans at the Smoothie King Center on February 23, 2017 in New Orleans, Louisiana.

Lou Williams scored 31 points off the bench, and James Harden — Houston’s fourth-leading scorer — added 22 points and 12 assists for the Rockets in a 137-125 home victory over the Oklahoma City Thunder on Sunday night.

Both players were crucial in the win, but Harden was particularly praised.

”He could’ve easily gotten 40 points and he could’ve just kept on going,” coach Mike D’Antoni said of Harden. ”But he knew these guys were going and threw the ball their way. He just plays the game the way it should be played.”

Russell Westbrook led the Thunder with 39 points, 13 assists and 11 rebounds for his second consecutive triple-double and 36th this season, although Harden led the Rockets to a 25-point explosion through three quarters in the matchup between top MVP contenders.

”They hit a lot of shots, man,” Westbrook said. ”They got hot and especially with a team like that, they get hot and it can be trouble.”

Trevor Ariza and Eric Gordon added 24 points each for the Rockets, whose lead was cut to eight on a 3-pointer by Westbrook with about 90 seconds remaining. Houston scored four quick points after that to secure the win.

Harden didn’t take all the credit, however: he took the time to praise his teammates.

”Especially when you’ve got several guys knocking down shots and making plays,” he said. ”Trevor did a really good job on both ends and obviously Lou and Eric. Pat (Beverley) didn’t score the ball but he did so many other things that won’t show up on the stat sheet but got us a victory.”

Harden left late in the game after falling onto the court and appearing to injure his left wrist. He said he didn’t expect to miss any time.

Williams made 11 of 15 shots and tied a career-high by making 7 of 8 3-pointers. He didn’t miss a shot until his layup was blocked by Jerami Grant early in the fourth quarter.

Houston won its fourth straight overall and has won nine of their past 12 games against Oklahoma City, (41-31, 6th in Western Conference) who lost after winning five of their last six.

The Rockets gained a 79-59 lead by halftime thanks in part to nearly perfect 3-point shooting by Ariza and Williams. Ariza made four of five attempts and had 16 points at the break, and Williams was a perfect 6 for 6 overall, with four 3-pointers to pile up 18 points in the first two quarters. Houston’s 79 points were the most the team had scored in a half this season.

Houston’s Ryan Anderson will miss approximately two weeks after spraining his right ankle on Friday night against the Pelicans. D’Antoni hopes Anderson will recover in time to play the last couple of regular-season games and be at full strength for the start of the playoffs.

The Thunder next visit Dallas on Monday, while the Rockets will host Golden State on Tuesday.

NEW ORLEANS, LA – FEBRUARY 23: Lou Williams #12 of the Houston Rockets shoots the ball during a game against the New Orleans Pelicans at the Smoothie King Center on February 23, 2017 in New Orleans, Louisiana.