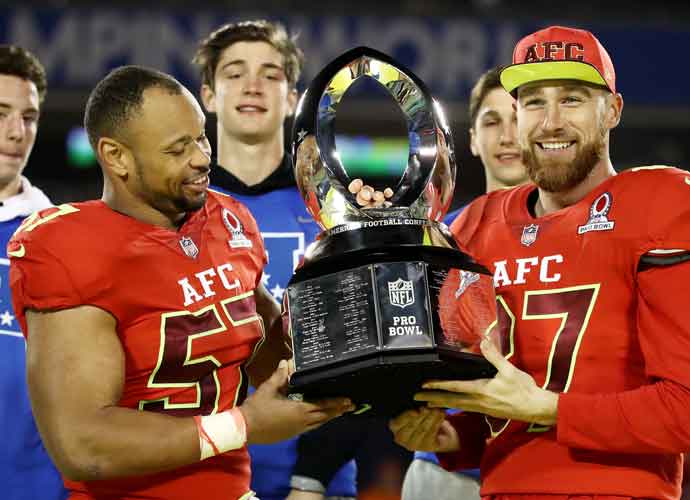 ORLANDO, FL - JANUARY 29: Lorenzo Alexander #57 and Travis Kelce #87 pose with the tophy after the AFC defeated the NFC 20 to 13 during the NFL Pro Bowl at the Orlando Citrus Bowl on January 29, 2017 in Orlando, Florida. (Photo by Sam Greenwood/Getty Images)

Kelce caught three passes for 36 yards and a touchdown, while Alexander led the AFC with eight solo tackles.

Pete Sweeney of the Chiefs’ official website tweeted a photo of the two MVPs with their prizes: sleek new cars.

Kelce played a critical role in the AFC’s go-ahead touchdown in the second quarter. He caught a pass from Andy Dalton and found the end zone with 1:40 remaining in the first half. The NFL shared a replay of the score on Twitter:

.@andydalton14 finds @tkelce for the TD!

Alexander also stopped the NFC from scoring late in the fourth quarter. He intercepted a pass from Kirk Cousins at his own 3-yard line and returned it to the 22-yard line before side-passing the ball to Aqib Talib. Cousins took the ball from Talib at the NFC 12-yard line, although the Denver Broncos cornerback recovered to secure the victory for the AFC. Here is the great play:

Neither player finished with particularly impressive numbers– at least not compared to other Pro Bowls–  and some people, like Bleacher Report’s Ian Kenyon, was underwhelmed by this year’s Pro Bowl MVP choices:

This might be the saddest alert I’ve ever received. Guy with 36 yards, 1 TD and guy with 8 tackles, 0 sacks win Pro Bowl MVP pic.twitter.com/LgMyc7p04A

You can watch the rest of the 2017 Pro Bowl highlights here: