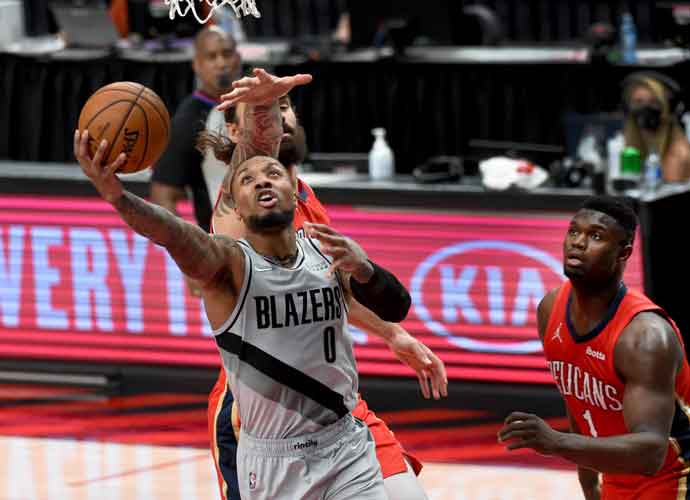 PORTLAND, OREGON - MARCH 16: Damian Lillard #0 of the Portland Trail Blazers drives to the basket on Steven Adams #12 of the New Orleans Pelicans as Zion Williamson #1 looks on during the second half at Moda Center on March 16, 2021 in Portland, Oregon. Blazers won 125-124. NOTE TO USER: User expressly acknowledges and agrees that, by downloading and or using this photograph, user is consenting to the terms and conditions of the Getty Images License Agreement. (Photo by Steve Dykes/Getty Images)

Damian Lillard put on a memorable performance against the New Orleans Pelicans on Tuesday night. The sharpshooting point guard finished the game with a whopping 50 points and 10 assists in a come-from-behind victory.

The Portland Trailblazers‘ star led the way as the team put on an unforgettable comeback with just five minutes left in the fourth quarter. The Pelicans were leading the Blazers by 17 points as the game neared the closing moments. It was almost certain that New Orleans would win, but Portland would refuse to concede as the team made an incredible effort to battle back.

The Trail Blazers went on a 25-7 run within the final 6 minutes of the game. Additionally, the team was able to hold the Pelicans to three of 10 from the field, and one of three from beyond the arc. Portland also forced three turnovers over that final stretch. Lillard scored seven of his 50 points within the final minute of the game to help the team clinch a victory.

Despite the aggressive comeback from Portland in the final minutes of the game, New Orleans still had time to win the game. With just seven seconds left on the clock and New Orleans leading by three, Brandon Ingram missed two free throws. The following possession, Lillard was fouled and sank both free throws to cut the lead to one. Luckily for Portland, the Pelicans fumbled the ensuing possession, leading to a possession change. With one second left in the game, Lillard was fouled again. With the game on the line, the All-Star converted both free throws to give the Blazers a one-point lead and the eventual win.

Portland ended up winning 125-124 in dramatic come-from-behind fashion. The Blazers set a franchise record by converting all 31 of their free-throw attempts. Additionally, Portland became the first team to come back from 17 points in the final six minutes of the game. As for Lillard, this was his his 12th 50-point game. He passed Hall of Famer Allen Iverson to become the fourth player with the most 50-point performances in NBA history.

The superstar guard scored 50 points on just 20 shots from the field. Lillard sank 13 of those attempts, went 6-of-13 from beyond the arc, and a ridiculous 18-of-18 from the charity stripe. The 18 free throws are a new career-high for the face of the Trail Blazers.

It was an epic night for Lillard and fans of the Trail Blazers.