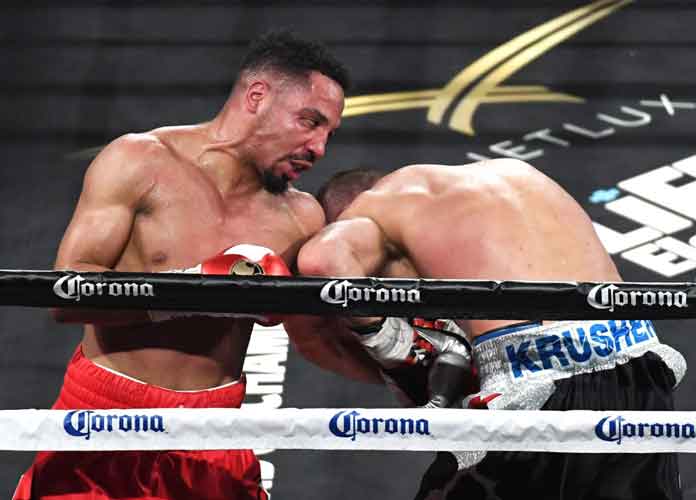 LAS VEGAS, NV - JUNE 17: Andre Ward (L) hits Sergey Kovalev with a left in the eighth round of their light heavyweight championship bout at the Mandalay Bay Events Center on June 17, 2017 in Las Vegas, Nevada. Ward retained his WBA/IBF/WBO titles with a TKO in the eighth round. (Photo by Ethan Miller/Getty Images)

Light heavyweight world titleholder Andre Ward revealed on his website that he is retiring from boxing.

The 33-year-old American ends his career undefeated (32-0) and with 16 knockouts.

“I want to be clear — I am leaving because my body can no longer put up with the rigors of the sport and therefore my desire to fight is no longer there,” his statement said. “If I cannot give my family, my team, and the fans everything that I have, then I should no longer be fighting.”

He added: “I felt the physicality of the sport — not just in-the-ring stuff, but the training and the preparation — start to take its toll on me for the last two or three years, and I bit down and continued to push through. And at this point, it’s time, and I know it’s time.”

Ward — a 2004 Olympic champion — told reporters last month that his contract with HBO was up, although he remains under contract with promoter Roc Nation Sports, despite rumors to the contrary.

The boxer has been with HBO since he knocked out Chad Dawson in 2012. However, Ward has had two long layoffs since due to promotional issues.

“Andre Ward ends his boxing career as he only knew how to live it — as a champion at the top,” Peter Nelson, executive vice president of HBO Sports, said in a statement. “To watch Ward was to marvel at constant mastery of craft in the ring, to say nothing of his being the consummate role model outside it. The Hall of Fame will be lucky to have him.

“We wish Andre and his family much success and happiness as he explores new opportunities, including with our own HBO family as one of the expert analysts on our broadcast team.

“It was a privilege for HBO to serve as the television platform for many of his landmark achievements in the sport he loves.”

Ward is the last American man to win Olympic gold in boxing. He also served as a ringside ESPN analyst for the Aug. 19 junior welterweight unification fight between Terence Crawford and Julius Indongo. Ward will also continue to announce fights for HBO.

LAS VEGAS, NV – JUNE 17: Andre Ward (L) hits Sergey Kovalev with a left in the eighth round of their light heavyweight championship bout at the Mandalay Bay Events Center on June 17, 2017 in Las Vegas, Nevada. Ward retained his WBA/IBF/WBO titles with a TKO in the eighth round. (Photo by Ethan Miller/Getty Images)