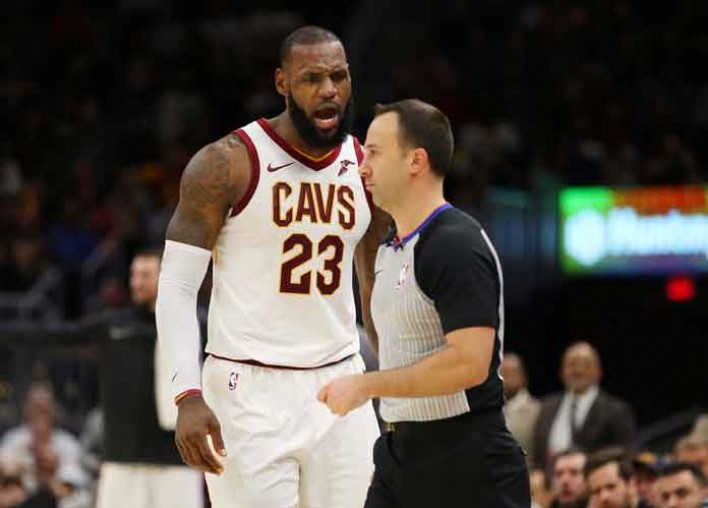 CLEVELAND, OH - NOVEMBER 28: LeBron James #23 of the Cleveland Cavaliers argues after being ejected in the second half by referee Kane Fitzgerald #5 while playing the Miami Heat at Quicken Loans Arena on November 28, 2017 in Cleveland, Ohio. Cleveland won the game 108-97. NOTE TO USER: User expressly acknowledges and agrees that, by downloading and or using this photograph, User is consenting to the terms and conditions of the Getty Images License Agreement. (Photo by Gregory Shamus/Getty Images)

LeBron James was slammed by a conservative news pundit last week for criticizing President Donald Trump, and now the King has fired back at his critic.

Fox News host Laura Ingraham told the 33-year-old Cleveland Cavaliers star to “keep the political commentary to yourself” and “shut up and dribble” after James and Kevin Durant both called out Trump on an ESPN interview for dividing the country with his racist and generally offensive rhetoric, some of which James called “laughable.”

Ingraham mocked James for leaving high school a year early and said it was unwise to seek advice from a person who is paid millions of dollars each year “to bounce a ball.”

Trump has drawn ire from many black Americans following several insensitive remarks he has made, including calling Haiti and African nations “s—holes.” February is Black History Month, so the President’s comments have a particularly stronger meaning right now.

One prominent athlete who rushed to defend James following Ingraham’s comments was Philadelphia Eagles defensive end Chris Long. The member of the Super Bowl-winning team lambasted Ingraham and her network, writing on Twitter that he believed she was simply “needing to feel like you’ve got control of athletes like LeBron.”

“If you reply to ‘stick to sports,’ you should probably tune out of Fox News because they’ve got karate guys talking climate change on there,” Long added.

Long also tweeted screenshots of several celebrities — from sports figures to musicians and Hollywood stars — being allowed to speak about politics on Fox News.

“What’s the pre-requisite for who can talk politics?” the defensive end asked in a separate tweet.

James responded to Ingraham’s criticism with his own comments and with personalized footwear during Sunday’s NBA All-Star Game at the Staples Center in Los Angeles. The King, who was named the game MVP for the third time in his career, donned a pair of white Nike sneakers with the words “More Than An Athlete” inscribed on them.

James also shared a glowing message with the phrase “I am more than an athlete” on his Instagram, and used the hashtag “#wewillnotshutupanddribble.”

Durant called Ingraham’s comments “racist” and added while he does “play basketball, I am a civilian and … a citizen of the United States, so my voice is just as loud as hers ― or even louder.”

James also said he refused to be quiet like Ingraham demanded.

So, thank you, whatever her name is. … I get to sit up here and talk about what’s really important and how I can help change kids,” James said at a media session following the All-Star Game practice.

James has previously used his sports gear to convey social messages. He once wore a pair of black-and-white sneakers with the word “Equality” emblazoned on them.

James’ team, named Team LeBron, edged Team Stephen (led by Stephen Curry) in Sunday’s All-Star Game 148-145. James led all scores with 29 points, and also recorded 10 rebounds and 8 assists. His team’s margin was the closest in an All-Star Game since 2012.

Durant and James sealed the victory in the final seconds by cornering Curry and preventing him from scoring one last basket.

This year’s All-Star Game was considered more competitive than most, and also had a larger cash prize. The purse for the winning team was raised to $100,000 from $50,000 per player. Each team also selected a charity, and the winning team was awarded $350,000 to give to a charity of its choice. The losing team’s charity was given $150,000. (Team LeBron chose After-School All-Stars Los Angeles, and Team Stephen selected Brotherhood Crusade, also based in Los Angeles.)

CLEVELAND, OH – NOVEMBER 28: LeBron James #23 of the Cleveland Cavaliers argues after being ejected in the second half by referee Kane Fitzgerald #5 while playing the Miami Heat at Quicken Loans Arena on November 28, 2017 in Cleveland, Ohio. Cleveland won the game 108-97. (Photo by Gregory Shamus/Getty Images)