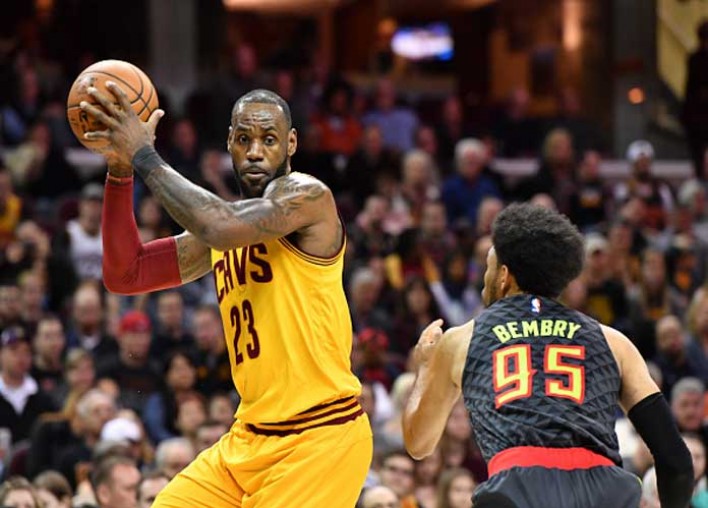 CLEVELAND, OH - APRIL 7: LeBron James #23 of the Cleveland Cavaliers looks for a pass while under pressure from DeAndre' Bembry #95 of the Atlanta Hawks during the first half at Quicken Loans Arena on April 7, 2017 in Cleveland, Ohio.

LeBron James and the Cleveland Cavaliers suffered a 126-125 overtime loss to the Hawks in Atlanta on Sunday, and after squandering a 26-point lead, the Cavs blamed the referees and other officials for contributing to their defeat.

“It wasn’t a foul on my sixth foul,” said James, who fouled out with 1:52 left in overtime and Cleveland ahead by three, for contact with Atlanta’s Paul Millsap while fighting for a rebound. “I knew I had five [fouls]. I knew the ball was going long. So I may have grazed Millsap a little bit, but I mean, throughout the course of a game [that happens]. I didn’t push him or anything like that.”

That marked only the second time this season James has fouled out, and that is the most fouls in any campaign of his 14-year career, according to ESPN Stats & Information. James’ first foul came during Cleveland’s 140-135 overtime victory in February against Washington. It was also the sixth time in the forward’s career that he fouled out of a game.

However, there were several other calls against the Cavaliers that they disagreed with. With four seconds remaining in regulation, for instance, a jump ball was called when Millsap — who finished with 22 points — and Kent Bazemore enveloped Kyrie Irving where the baseline intersected with the sideline out of bounds. The replay showed both Millsap and Bazemore with a foot out of bounds as referee Derrick Collins ran in and signaled for the jump ball.

James, who recorded a triple-double with 32 points, 16 rebounds and 10 assists, then added that when he requested a timeout from a referee at one point, the response he received was unlike anything he had ever heard in his entire NBA tenure.

“We had some bad breaks, obviously, with the jump ball,” James said. “A couple of their guys were out of bounds. And then with the jump ball for Kyrie in the corner, I’m sitting right next to the ref [Leroy Richardson] and asking for a timeout, and the explanation he gave me, I never heard in my 14-year career. Never. So it doesn’t take away from the fact that we still had a huge lead to start the fourth, but every play counts, no matter what is going on.”

James went on to explain the reason Richardson gave him for denying his timeout request.

“He told me that I’m not allowed to call timeout because he didn’t know who had possession of the ball,” James said. “And I was the one who entered the ball to Kyrie. And as soon as I seen Millsap go trap Kyrie in the short corner, I looked at him and called timeout twice — at least twice — and he wasn’t even paying me no attention.”

Richardson also called James for a five-second violation when he was inbounding the ball with 18 seconds remaining in regulation an Cleveland up 109-105.

One member of the Cavs was heard saying “f—ing Leroy Richardson” outside the visitors’ locker room following the game.

Two block-charge calls also went against Cleveland in overtime. The first came with 42.1 seconds remaining, when Kevin Love was initially whistled for a charge on Mike Dunleavy that would have been Love’s sixth foul and gotten him tossed from the game.

The NBA’s return center overturned the ruling on the floor because Dunleavy’s feet were inside the restricted circle. Love, who is shooting 87.3 percent from the free throw line this season, went just 1-for-2 from the line after that review.

Irving, meanwhile, was called for an offensive foul shortly afterwards, as the Cavs trailed 123-120 with 12.3 seconds left, for making contact with Millsap, who then slid over and caused Irving to draw a charge call.

The Cleveland guard was upset by the officiating at that point, but ultimately decided it wasn’t worth the potential punitive costs, both explicit and implicit.

“How much is the fine for talking about the refs?” Irving, who scored 45 points, said when asked about that charge call. “It’s like $50 [thousand], $25? Not worth it. Not worth it, so sorry. I had some good conversation with the refs — just a few plays that didn’t go our way. That’s not the kind of the first step that led to the breakdown of what happened in that fourth quarter and why it extended the game. There were some things that could’ve gone a different way but didn’t, and now we just got to move on from here.”

Irving scored 15 points in the first quarter. His 3 at the 7:22 mark gave Cleveland its first double-digit lead. Irving played 45 minutes despite soreness in his surgically repaired right knee.

Cavs coach Tyronn Lue did not comment much on the officiating, though he did say he agreed there were multiple unfair calls that hurt his team.

“Jumping out to that lead, being up 26, that’s who we are and that’s how we’re capable of playing,” Lue said. Everything went wrong for us in that fourth quarter. Every single thing. From inbounding the ball to jump balls, to whatever. Hats off to those guys, they did a good job of coming back in that fourth.”

James added that despite the loss, however, the Cavs are prepared for the postseason.

Tim Hardaway Jr. scored 21 points to help the Hawks beat the Cavs for the second time in three days.

Atlanta first took the lead on Sunday when Millsap scored a 3 with 1:12 remaining in overtime to make it 118-116.

Mike Muscala’s 3-pointer from the right corner put the Hawks back up by one with 35 seconds left.

It was in the fourth quarter that the Hawks erased the Cavs’ 26-point lead. Atlanta outscored Cleveland 44-18 in the period and forced overtime with Millsap’s buzzer-beating baseline jumper. Hawks coach Mike Budenholzer credited Millsap, Hardaway and his reserves for the big win. Atlanta are the third team in NBA history to overcome such a deficit. The Hawks had lost 12 of 13 in the series.

The Cavs, (51-29) the reigning NBA champions, fell into a tie with Boston (51-29) for the lead in the Eastern Conference. Both teams have two regular-season games left. If the Cavalier and Celtics finish with the same record, Cleveland will secure the top seed for winning the season series.

Cleveland went 19 for 46 beyond the arc, extending its single-season franchise record of hitting at least 15 in 27 games. The Cavs entered the game ranked second in the NBA in treys made and third in 3-point percentage.

The Cavs next visit Miami, where they’ve lost 12 straight, on Monday night.

The Hawks will host Charlotte on Tuesday, and are 0-3 in that season series.

CLEVELAND, OH – APRIL 7: LeBron James #23 of the Cleveland Cavaliers looks for a pass while under pressure from DeAndre’ Bembry #95 of the Atlanta Hawks during the first half at Quicken Loans Arena on April 7, 2017 in Cleveland, Ohio.