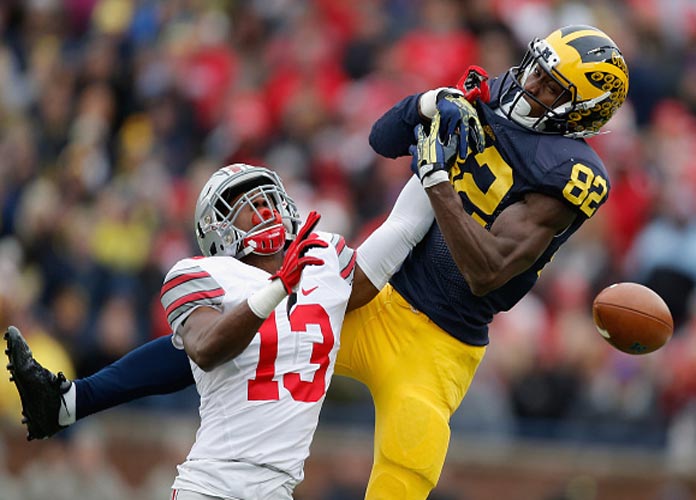 ANN ARBOR, MI - NOVEMBER 28: Eli Apple #13 of the Ohio State Buckeyes breaks up a pass intended for Amara Darboh #82 of the Michigan Wolverines in the first half at Michigan Stadium on November 28, 2015 in Ann Arbor, Michigan. (Photo by Gregory Shamus/Getty Images)

After Eli Apple confirmed that he had signed a one-year deal with the Las Vegas Raiders on March 18, league sources told ESPN that the deal fell through on Thursday evening. Apple will once again become a free agent after New Orleans declined the fifth-year option on his contract. The Raiders’ motive regarding parting ways with Apple is still unclear.

Prior to the news, Apple posted on his Instagram and claimed, “excited to start a new journey as a Raider.”

The 24-year-old was traded to the Saints from the Giants in 2018 after locker room turmoil and arguments with the coaching staff eventually lead to an irreparable relationship between Apple and the organization. In his two seasons with New Orleans, Apple recorded 2 interceptions and 110 combined tackles while also contributing as an exceptional player when it comes to man coverage.

The Raiders found a replacement for Apple shortly after the deal fell apart coming to an agreement with former Browns’ safety Damarious Randall on a one-year deal worth up to $3.25 million. Randall is 28 and is coming off a year with no interceptions after recording four in 2018. In five seasons, Randall has compiled 14 interceptions, 47 passes defended, 290 tackles and 2.5 sacks over 65 games.

Now, Apple will have to look for a new destination.