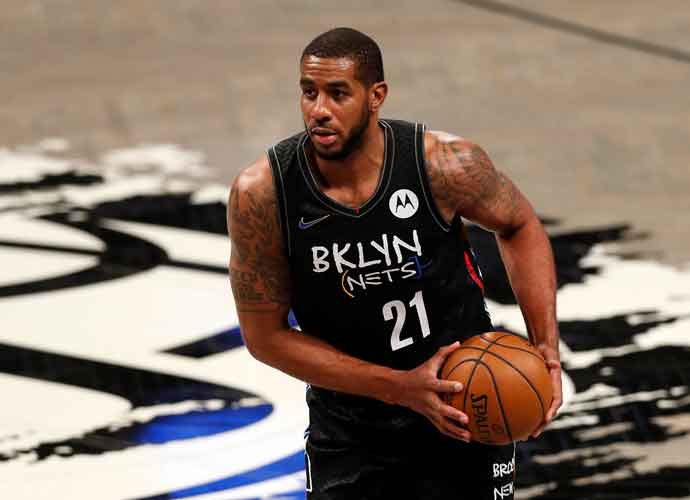 NEW YORK, NEW YORK - APRIL 05: (NEW YORK DAILIES OUT) LaMarcus Aldridge #21 of the Brooklyn Nets in action against the New York Knicks at Barclays Center on April 05, 2021 in New York City. The Nets defeated the Knicks 114-112. NOTE TO USER: User expressly acknowledges and agrees that, by downloading and or using this photograph, User is consenting to the terms and conditions of the Getty Images License Agreement. (Photo by Jim McIsaac/Getty Images)

On Thursday, LaMarcus Aldridge announced his sudden retirement from basketball after experiencing an irregular heartbeat.

The seven-time All-Star announced his decision on social media. “My last game, I played while dealing with an irregular heartbeat,” Aldridge wrote. “Later on that night, my rhythm got even worse which really worried me even more.”

The Brooklyn Nets center wrote about his decision to get checked out in the hospital and the support he received from the team. “Though I’m better now, what I felt with my heart that night was still one of the scariest things I’ve experienced,” his statement continued.

“I’ve made the difficult decision to retire from the NBA,” the center wrote. “For 15 years, I’ve put basketball first, and now, it is time to put my health and family first.”

The Nets’ organization was supportive of Aldridge’s difficult decision. Brooklyn released a statement from general manager Sean Marks. “We know this was not an easy decision for him, but after careful consideration and consultation with numerous medical experts, he made the best decision for him, his family, and for his life after basketball.”

Statement from our GM Sean Marks on the retirement of LaMarcus Aldridge: pic.twitter.com/3WKRJgAmpn

Aldridge was drafted with the second pick of the 2006 NBA Draft by the Portland Trail Blazers. The big man quickly emerged as a star for Portland and was one of the anchors for the team. In his early seasons with Portland, he was seen as the future of the team. Aldridge was part of the core that involved Brandon Roy and Greg Oden, but injuries forced Roy and Oden into early retirements.

However, Aldridge formed a duo with fellow Blazers teammate and star Damian Lillard. The two were able to lead the team into Western Conference contention on several occasions. Lillard spoke about his former teammate and showed his appreciation for the former Blazer. “LA is one of the greatest players to play in Portland,” Lillard said. “He was at the peak of his career when I got here.”

“LA is one of the greatest players to play in Portland” – @Dame_Lillard pic.twitter.com/9nIpYjF1eE

In 2015, the All-Star signed with the San Antonio Spurs. Aldridge spent five seasons with San Antonio. Spurs coach Gregg Popovich released a statement regarding Aldridge’s retirement. “We’re grateful for his contributions, both on and off the court, during his time here in San Antonio,” Popovich said. “I’m proud of him for making this difficult decision and we wish him and his family all of the best in the future.”

“We’re grateful for his contributions, both on and off the court, during his time here in San Antonio.”

The Spurs and Aldridge agreed to a contract buyout last month, and the big man signed with the Nets. The center only appeared in five games for Brooklyn before his abrupt retirement.