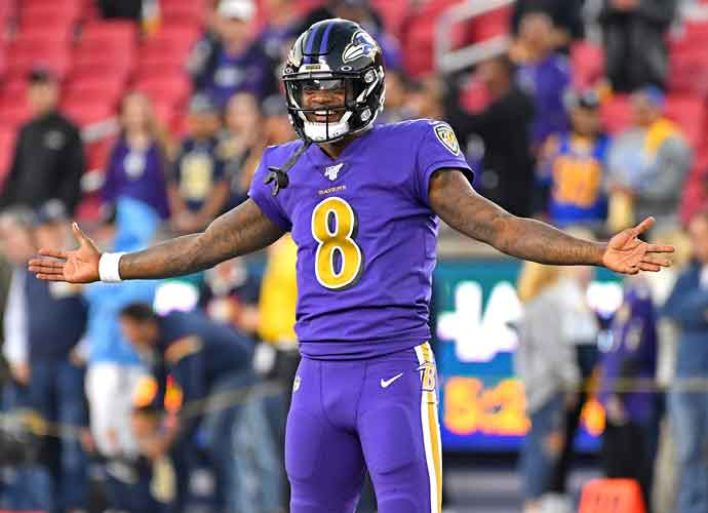 LOS ANGELES, CA - NOVEMBER 25: Lamar Jackson #8 of the Baltimore Ravens warms up before the game against the Los Angeles Rams at Los Angeles Memorial Coliseum on November 25, 2019 in Los Angeles, California.

Lamar Jackson has become the first player in history to be crowned player of the week three times in four weeks. The young quarterback won AFC Player of the Week again this week as he continues his drive towards league MVP. The past four games have seen Jackson playing at an incredibly high level, hunting down and capturing various records. He has completed 76.2% of his passes (64 of 84) and has thrown for 777 yards, with 13 touchdowns and zero interceptions. The young star known for his rushing ability has rushed 41 times for 300 yards, delivering three touchdowns himself.

Monday night’s game proved to be a huge win for the Ravens who jumped to 9-2 over the Los Angeles Rams (6-5) by a final of 45-6. This Week 12 victory marks the Ravens seventh consecutive win. Jackson nailed five touchdowns with 169 yards, while Mark Ingram II assisted with 15 carries for a total of 111 yards and one touchdown. Baltimore had possession for double that of the Rams, completing 31 first downs compared to the Rams 14 and totaling 480 yards against the Rams 221 yards.

The former Louisville quarterback and Heisman winner has made quite the name for himself already in his early career. Drafted 32nd overall by the Ravens in the first round of the 2018 draft, he began his reign after relieving an injured Joe Flacco, becoming the youngest quarterback in NFL history. This year alone he has 30 touchdowns and only eight interceptions with 3,628 passing yards giving him a completion percentage of 63.8%. He has accumulated 1,578 total rushing yards with 11 touchdowns.

The Ravens will face Jimmy Garoppolo and the San Francisco 49ers (10-1) on December 1 on FOX as they look to continue their win streak to eight. The Ravens are favored to win, so we’ll see if the magic of Jackson is enough for a Ravens victory.