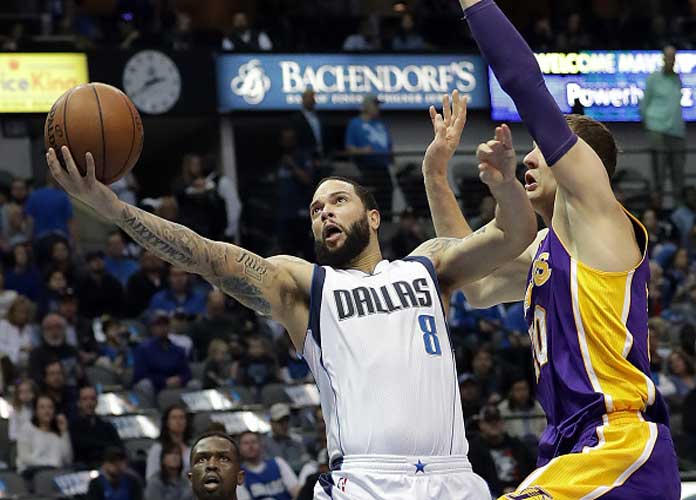 DALLAS, TX - JANUARY 22: Deron Williams #8 of the Dallas Mavericks takes a shot against Timofey Mozgov #20 of the Los Angeles Lakers at American Airlines Center on January 22, 2017 in Dallas, Texas.

The Lakers suffered their worst loss in franchise history in Sunday’s 122-73 road defeat to the Dallas Mavericks.

“We didn’t show up to play, honestly, which is frustrating,” first-year Lakers coach Luke Walton said after the 49-point drubbing. “Honestly, it’s embarrassing for us as a team and for us as an organization, for our Laker fans that are so good to us.”

“Again, at this point it is not about every night going out and winning,” Walton added. “It is playing a certain style that allows you a chance to win while we are trying to build this thing. It’s about getting better and building on games like our last game, and not being satisfied with it.”

The loss also, ironically, came on the 11-year anniversary of Kobe Bryant’s historic 81-point performance against Toronto, the second-most points scored by a single player in a game in NBA history.

It was the Mavericks’ (15-29) 13th consecutive victory over the Lakers, and they outscored their opponents 38-11 in the second quarter. Los Angeles had more turnovers (five) than field goals (four on 17 attempts) during the quarter.

“Tough game. That’s it,” said guard Jordan Clarkson, one of only two Lakers to score in double figures during the loss. “A loss is a loss.”

The Lakers (16-32), meanwhile, have dropped six of their last seven games. Four of those losses have come by double digits.

Dirk Nowitzki scored all 13 of his points for Dallas in the first half, after only netting three points in an overtime loss to the Jazz on Friday.

”I looked sluggish the other night on that back-to-back,” said Nowitzki, who had 20 minutes of play time, ”but took a day off yesterday, didn’t do anything. Felt a lot better today.”

The game was close for 10 minutes, with the Mavs leading 23-22 before they scored the next 15 points to blow it open.

Justin Anderson led seven Mavericks in double figures with a game-high 19 points in 16 minutes, his most playing time since Dec. 27.

Dallas led 67-33 at the half and dominated from there. They scored their most points and allowed the fewest in a half and a game this season. The 34-point halftime lead was the third-largest in franchise history.

The Lakers, on the other hand, scored their fewest points in a quarter, a first half and a game.

DALLAS, TX – JANUARY 22: Deron Williams #8 of the Dallas Mavericks takes a shot against Timofey Mozgov #20 of the Los Angeles Lakers at American Airlines Center on January 22, 2017 in Dallas, Texas.