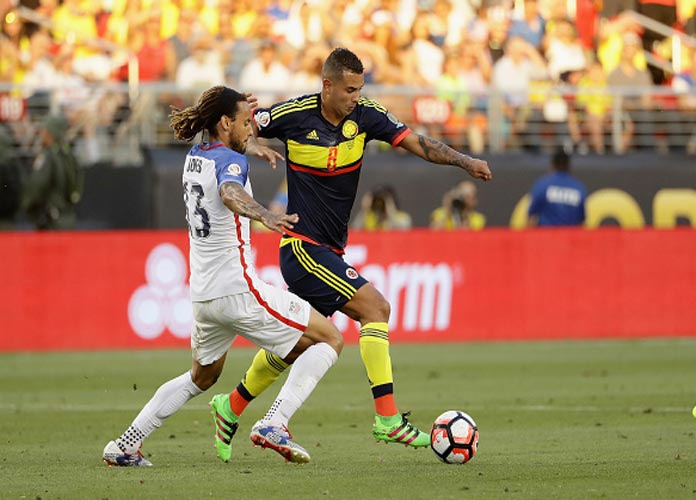 The LA Galaxy signed U.S. Men’s National Team midfielder Jermaines Jones on Wednesday, more than one month after acquiring his MLS rights from the Colorado Rapids.

The move marks the Galaxy’s first major acquisition of the winter. The team dealt a first-round pick in the 2017 MLS SuperDraft and a conditional second-round pick in 2018 to the Rapids for the right to sign Jones, whose contract expired at the end of 2016.

Other player contracts are in the works for the Galaxy. On Thursday, the team is expected to announce the signing of 23-year-old Portuguese midfielder João Pedro. Plus, rumors of a deal with Spanish midfielder Jonathan dos Santos were reignited Wednesday as negotiations with Dutch midfielder Gregor Breinburg seemed to dissolve.

Jones, 35, and his family have been living in Los Angeles ever since he left Germany’s Bundesliga to join MLS in 2014. The midfielder played 14 seasons in Germany, where he was born.

Terms of Jones’ contract were not announced but the team said targeted allocation money was used to complete the deal, meaning Jones will earn more than the MLS maximum wage of $480,625 in 2017. He had a base salary of $600,000 last season, when he played just nine games with the Rapids.

“Jermaine is a winner who has experience in MLS and playing against the highest competition in the world,” new LA Galaxy manager Curt Onalfo said in a statement. “He has a relentless engine on the field and we are confident that he will strengthen our midfield. We look forward to him joining the Galaxy as we prepare for the upcoming season.”

Jones has played 60 games for the national team, including several during the 2014 World Cup in Brazil, but never made more than 17 starts in parts of three MLS seasons. He missed three-and-a-half months with a knee injury last year before returning in time to help the Rapids eliminate the Galaxy in the Western Conference semifinals.

Since then, the Galaxy have lost designated players Robbie Keane and Steven Gerrard, as well as former MLS Cup winners Landon Donovan, Mike Magee, Leonardo and A.J. DeLaGarza. The team also had to replace its entire coaching staff after Bruce Arena replaced Juergen Klinsmann as the men’s national team’s head coach and took four assistants with him.

Galaxy officials also stated Wednesday that they have agreed to a contract extension with midfielder Sebastian Lletget, who is in camp with the USMNT. The team did not disclose terms of that deal, either. According to the MLS Players’ Union, Lletget earned $115,500 last season, his first full year in MLS.