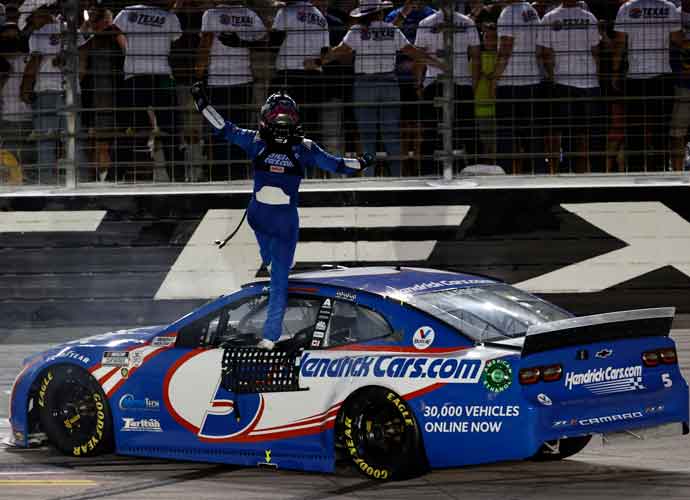 FORT WORTH, TEXAS - JUNE 13: Kyle Larson, driver of the #5 HendrickCars.com Chevrolet, celebrates after winning the NASCAR All-Star Race at Texas Motor Speedway on June 13, 2021 in Fort Worth, Texas. (Photo by Chris Graythen/Getty Images)

Kyle Larson knows the effort required to win an event as challenging as the NASCAR All-Star Race – and he used just enough to give Hendrick Motorsports a victory for the second straight year. The victory also marks 10 total victories at the event for Hendrick Motorsports.

The win was not easily earned, with competitor Brad Keselowski nearly upsetting Larson. The efforts of Keselowski required Larson to utilize a risky passing maneuver in order to regain the lead. Following the risky pass, Larson held onto the first-place position for the remaining few laps.

Larson last won the NASCAR All-Star Race in 2019, competing with partner Chip Ganassi. However, Larson found himself in the heat of controversy when he was caught in a hot mic moment using a racial slur during a live-streamed virtual race. The abhorrent vocabulary hurled by Larson resulted in a six-month suspension for the professional racer, who then missed the 2020 All-Star Race.

Larson’s talent, regardless of his previous questionable antics, is undeniable. With the victory, he is now just the eighth driver to ever win the NASCAR All-Star Race more than once. Despite uncomfortable weather conditions – temperature during the race reached 106 degrees Fahrenheit, and prior to the event track temperatures climbed into the 140s – Larson was nevertheless able to finish victorious.

Ultimately, the event was used to honor Eddie Gossage, a long-time NASCAR promoter, whose final day of his three-decade career was the same day as the All-Star Race.