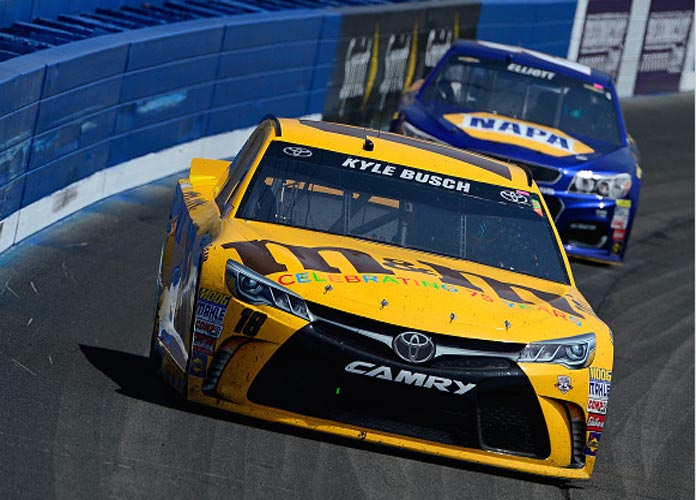 Kyle Busch led at Brickyard a record of 149 of 170 laps to win his second consecutive Brickyard 400 on Sunday. Busch also won the Xfinity Series on Saturday and became the first NASCAR driver to win both poles and both races in the same weekend. He now holds 38 Sprint Cup wins.

Busch’s teammate Matt Kenseth finished second behind him by 2.126 seconds. Kenseth and Busch are tied in 17th place for all-time wins on the NASCAR Sprint Cup Series.

Busch joins Jimmie Johnson, who won Brickyard 400 in 2008 and 2009, as the only back-to-back winners of the Sprint Cup Series race. Johnson placed third at Brickyard.

Busch was bombing around Indy in a Toyota Camry covered with the Skittles brand. “I can’t thank everyone from Skittles enough, and everyone from M&M’s and their 75th anniversary. This Toyota was awesome today,” Busch said. “It was just so fast and able to get out front and stay out front. Not even some of my teammates could challenge.”

Busch wasn’t the only spectacle at Brickyard. Jeff Gordon made his comeback out of retirement to replace Dale Earnhardt Jr. who has not been cleared by doctors to drive due to concussion-like symptoms. It was also Tony Stewart’s final race. After the race the two Indiana natives drove one lap of the track side-by-side.

Busch lost the lead for 14 laps to after his first pit stop, but was able to take it back when the leader Brad Keselowski pitted. He lost the lead in another five laps when he took his second pit stop.

There was a bit of a scuffle nearing the end of the race, with a few crashes and restarts. The event went into a two-lap overtime, and the course ended up being a total of 425 miles.

The next race will be at Pocono Raceway July 31, and Kenseth will be back to defend his title.