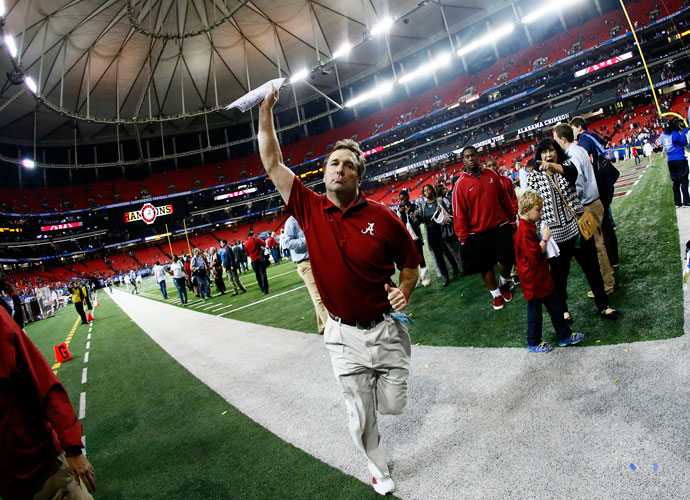 ATLANTA, GA - DECEMBER 06: Defensive coordinator Kirby Smart of the Alabama Crimson Tide celebrates their 42 to 13 win over the Missouri Tigers in the SEC Championship game at the Georgia Dome on December 6, 2014 in Atlanta, Georgia. (Photo by Kevin C. Cox/Getty Images)

Georgia head football coach Kirby Smart is set to get a seven-year contract extension with the Bulldogs worth $49 million, according to ESPN.

Smart, 42, will thus be under contract until the end of the 2024 season. A former defensive coordinator at Alabama from 2008 to 2015, Smart joined Georgia in 2016. However, he had previously worked for the Bulldogs as a running backs coach in 2005, the year they won the SEC title.

Georgia also won the SEC championship this past season and appeared in the College Football Playoff National Championship. In two years, Smart has led the team to a 21-7 overall record.

The Bulldogs finished 13-2 in 2017, and lost to Alabama 26-23 in overtime in the CFP National Championship Game.

According to ESPN — which cited publicly disclosed contracts and industry sources — Smart is set to be the fifth-highest-paid coach in the Football Bowl Subdivision based on average annual salary through the duration of his deal.

$8,000: What Kirby Smart made as defensive backs coach at Valdosta State in 2000 (*Job included helping to build the locker room.)

Currently, Urban Meyer of Ohio State ($8.49 million) is the top-paid coach in the FBS in terms of average yearly pay. Next on the list is Alabama’s Nick Saban ($8.28 million) and Michigan’s Jim Harbaugh ($7.73 million).

Georgia lost several players in this year’s NFL Draft, including running backs Sony Michel and Nick Chubb. Chubb went to the Cleveland Browns in the second round, and Michel went to the New England Patriots as a first-round pick.

Nevertheless, the Bulldogs are still expected to succeed next season.