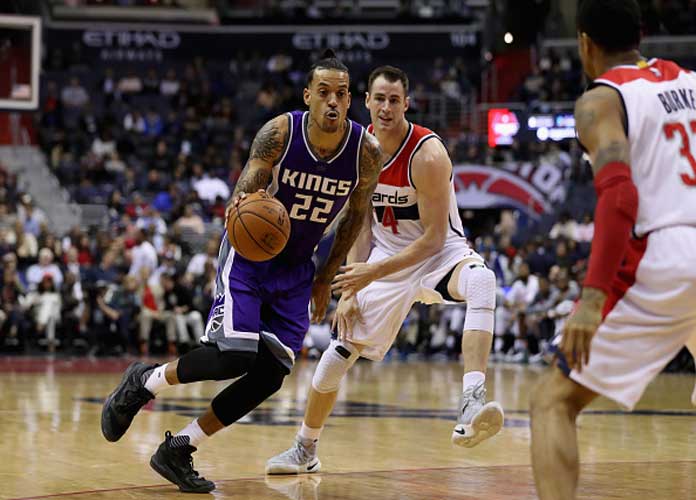 WASHINGTON, DC - NOVEMBER 28: Matt Barnes #22 of the Sacramento Kings dribbles the ball in front of Jason Smith #14 of the Washington Wizards at Verizon Center on November 28, 2016 in Washington, DC.

The New York City Police Department is seeking to speak with Sacramento Kings forward Matt Barnes regarding an alleged assault at a New York nightclub Monday morning, according to a police spokesperson.

Police stated the alleged assault, which reportedly involved Barnes choking a woman, occurred at Avenue nightclub in Manhattan following the Kings’ 106-98 loss to the New York Knicks on Sunday night.

The spokesperson didn’t provide any details of the incident or the investigation, although TMZ reported the assault involved a man choking a woman.

A representative for Barnes told TMZ that the player was defending himself against a violent group during the alleged altercation.

Barnes also posted the following message on Instagram Monday afternoon: “There’s always two sides to a story. The side the media consistently tries to paint of me…And what actually happened! Don’t believe everything you read.”

The Kings also released a statement on the incident:

“We have clear standards of conduct and behavior expected of the entire Kings organization – on and off the court. We are working with all parties involved to gather information in order to take any appropriate next steps.”

The rep told TMZ Sports that it all began when Kings center DeMarcus Cousins, who was also at the nightclub at the time of the incident, accidentally bumped a woman sitting at a booth next to the one occupied by Barnes and Cousins at the club and that several men who were with the woman attempted to get physical with Barnes. Cousins reportedly jumped into the fray to help defend his teammate before the police were called. Barnes claims he has taken photos of the injuries he sustained during the altercation to prove his side of the story, and attorney Alex Spiro, who is representing both players, said: “We do not believe a crime was committed and are hopeful no charges will be pressed.”

Spiro added that they are “cooperating fully with the authorities.”

Teams typically fly to the site of their next game immediately following road games, but the Kings next play in Dallas on Wednesday, so the schedule didn’t force them to leave New York on Sunday night.

Barnes played 17 minutes and recorded 2 points, 3 rebounds, and 1 assist for Sacramento during the Kings’  loss on Sunday. The 13-year veteran, who has incurred several disciplinary fines in his career, is averaging 7.5 points and 5.0 rebounds for the Kings (7-13) this season.

One of Barnes’ recent suspensions was a two-game ban in October 2015 following an altercation with then-Knicks coach Derek Fisher. The altercation occurred at the home of Gloria Govan, Barnes’ estranged wife, in Los Angeles. Barnes was suspended after a league investigation.

WASHINGTON, DC – NOVEMBER 28: Matt Barnes #22 of the Sacramento Kings dribbles the ball in front of Jason Smith #14 of the Washington Wizards at Verizon Center on November 28, 2016 in Washington, DC.