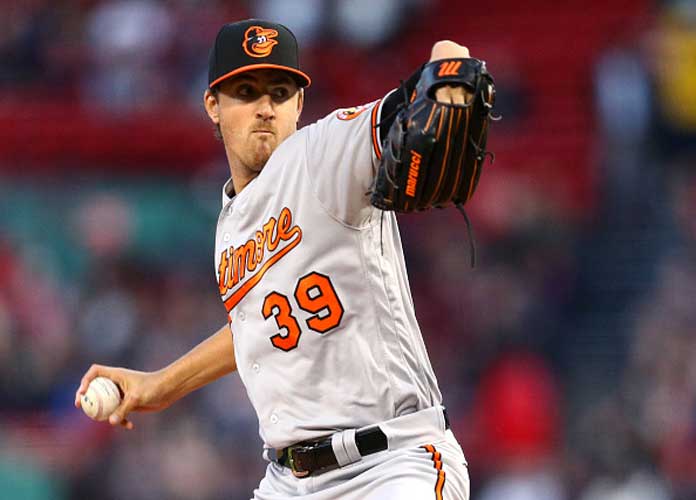 BOSTON, MA - MAY 3: Kevin Gausman #39 of the Baltimore Orioles pitches against the Boston Red Sox during the first inning at Fenway Park on May 3, 2017 in Boston, Massachusetts. (Photo by Maddie Meyer/Getty Images)

Right-handed pitcher Kevin Gausman, 30, is headed to the Toronto Blue Jays on a five-year, $110 million contract.

After Gausman was drafted by the Baltimore Orioles fourth overall in the 2012 draft, he became a reliable back-end starter. He played for parts of six seasons in Baltimore before stints with the Atlanta Braves and Cincinnati Reds, but it wasn’t until he got to the San Francisco Giants, where he spent the last two seasons, that he broke out as an elite starting pitcher.

Gausman already had a formidable fastball, but the Giants helped him hone his splitter into one of the most dangerous pitches in the league.

Last season brought the best stats of his career. He posted a 2.81 ERA with 227 strikeouts and 50 walks over 192 innings and was selected to the All-Star team for the Giants. His play made him one of the most sought-after free agents this off-season. The Giants made an effort to bring him back while the New York Mets, Boston Red Sox, Seattle Mariners and Los Angeles Angels showed interest as well. The Blue Jays proved to be the best fit for Gausman as he chose Toronto even after the Mets offered him a bigger contract, per Andy Martino from SportsNet New York.

The Mets offered Kevin Gausman more than the 5/$110 million he accepted in Toronto, per source.

Gausman couldn’t have been available at a more opportune time for the Toronto Blue Jays. Teaming up with José Berríos, who was just given a seven-year extension gives the Blue Jays a strong rotation for the next few years. They just lost starting pitcher Steven Matz to the St. Louis Cardinals, but there’s another more immediate hole that needed to be filled. Last season’s Cy Young award-winning pitcher Robbie Ray became a free agent in the off-season. Where Ray ends up has not yet been determined, but if he walks, the Blue Jays have their replacement in Gausman.

OF Travis Snider Retires After Playing For Eight MLB Teams