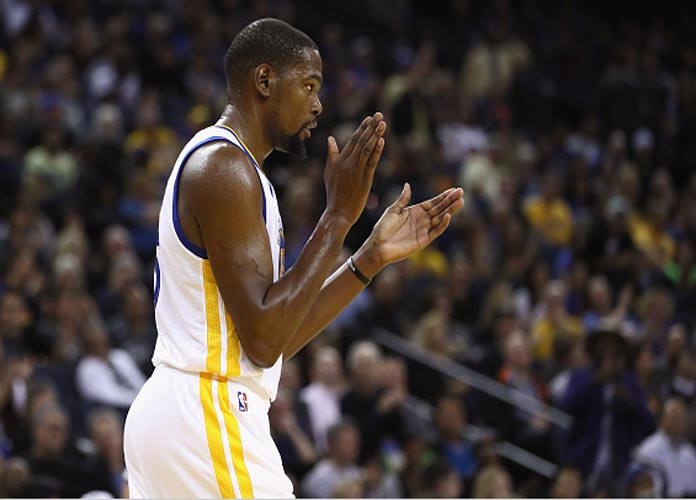 However, they are also the first team to lose the Finals after being up 3-1, as they were last season against the eventual NBA champions, the Cleveland Cavaliers. Nevertheless, Golden State came back strong this season.

Durant, who signed with the Warriors from Oklahoma City in July and hit just two shots in his modest preseason opener on Saturday– a loss to Toronto– finished strong with 21 points, seven rebounds, seven assists, two blocks and a steal in 24 minutes. Klay Thompson added 20 points in 21 minutes (10 of 14 overall, six of nine on threes).

The Clippers, on the other hand, struggled, finishing 25 of 77 shooting. Coach Doc Rivers called his team’s outing “terrible.”

Golden State led by as many as 53 points in the second half, and sunk an impressive 71 on the Clippers in the first half.

“It is fun when things click, if you show some bright spots in certain possessions where you’re coming down and you see the weapons we have,” said Steph Curry, the back-to-back MVP who had 14 points, five rebounds, five assists, and three steals in 23 minutes. “This is a nine-month journey, and one that’s not going to be won on Oct. 4, so we’re very (focused). I think we nitpick, which is good. We still have things we know we need to work on. Just staying focused, staying in the moment. Enjoying what we did tonight but knowing we’ve got 100-plus more games to get this thing done.”

Just a week before coming to Oakland, Rivers felt confident about his team and where they stood compared to their Western Conference rivals.

“I think we can play with anybody, and we don’t feel like there’s a gap,” Rivers had told reporters in Los Angeles. “I know history very well in this league, and there’s been a lot of super-teams put together, quote-unquote, super-teams, and I know the history. I feel comfortable where we’re at.”

J.J. Redick, Chris Paul, Jamal Crawford and Austin Rivers combined to shoot 1 for 24 from the field for the Clippers. They were overwhelmed from the start and posed practically no resistance.

Blake Griffin also looked shaky, particularly offensively. He did, however, miss nearly all of last season with an injury.

Although it was just a preseason game, the Warriors seem confident they will remain this strong throughout the season.

“Today was pretty good for us,” Durant said. “I think we can tighten up a little in a couple of areas. I think 18 (Warriors) turnovers is something that we don’t want. … For the most part, we moved the ball well (29 assists on 39 field goals). Bodies were moving and (they) had open shots for everybody. It was fun.”