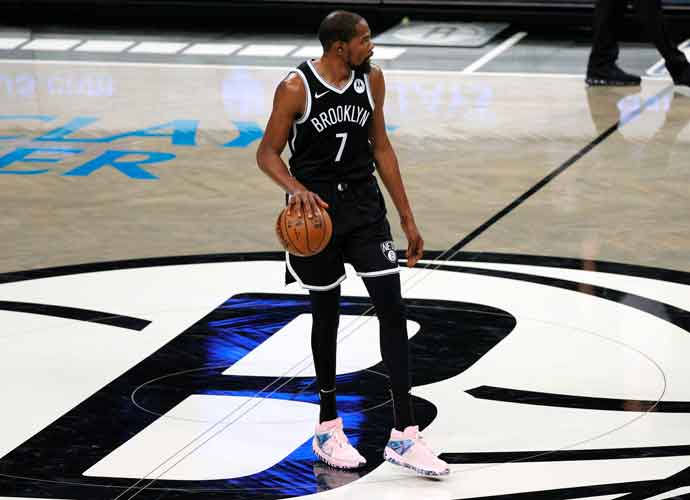 NEW YORK, NEW YORK - DECEMBER 13: Kevin Durant #7 of the Brooklyn Nets dribbles the ball during the second half against the Washington Wizards at Barclays Center on December 13, 2020 in the Brooklyn borough of New York City.

“Kevin Durant went back to the Nets locker room after suffering an apparent leg injury,” read a tweet from Sports Center. Brooklyn announced that the superstar suffered a thigh contusion and would not come back to play in the game. “Kevin Durant is out for the remainder of the game due to a left thigh contusion,” read the tweet by the Nets’ official account.

Kevin Durant is out for the remainder of the game due to a left thigh contusion.

After the game, Brooklyn head coach Steve Nash spoke about the All-Star’s injury. “He’s sore, but we don’t know how severe,” Nash said. “We’ll see tomorrow how he wakes up and go from there, but right now nothing’s been determined.”

Durant missed 18 months from a ruptured Achilles he suffered in June of 2019. The All-Star recently missed 23 games due to a left hamstring strain. He returned on April 7, but now he is sidelined once again.

There is no doubt that Durant is feeling frustrated about missing games again for injuries. Fellow Nets teammate Jeff Green spoke about what the star may be feeling. “I know he’s bummed that it’s happened frequently over the last couple of weeks, and he wants to be out there playing,” Green said. “I’m sure he’s going to do whatever he needs to do to get back on the floor.”

Nets superstar point guard Kyrie Irving also talked about his teammate’s injury. “Anytime one of our teammates goes down, anytime something like that happens, it’s definitely going to take a hit for us,” Irving said. “And he’s just gotten back, we just pray that it’s not too serious and he’s able to recover, but it definitely has a hit on our continuity at times.”

The Nets’ big three of Irving, James Harden, and Durant have all experienced injuries this season. Harden is currently sidelined with a hamstring injury. Irving has missed games because of injuries and personal reasons. The big three have only played seven games together, but fans will hope the three will be healthy for the playoffs.

As long as the Nets are fully healthy for the postseason, they have a very good chance at representing the Eastern Conference in the NBA Finals.