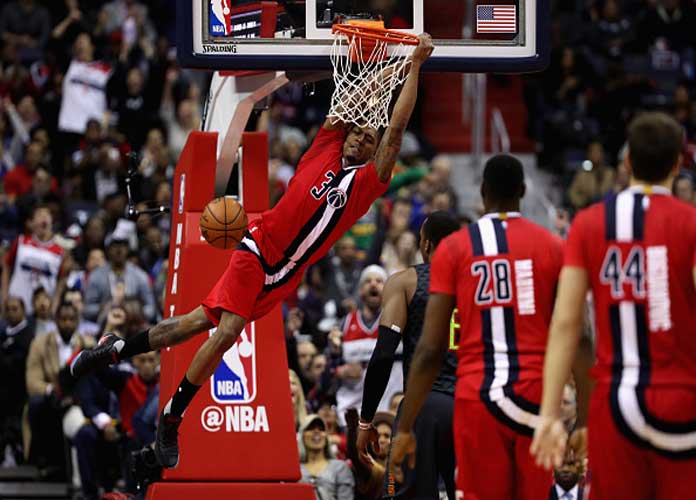 While the battle between Steph Curry and Bradley Beal for this year’s scoring title continues, Beal had another Golden State Warriors player in sight yesterday. The star shooting guard called out forward Kent Bazemore on Twitter, after Bazemore seemingly made a joke at Beal’s expense. On Monday, during practice, Bazemore complimented Curry for his extraordinary ability to remain humble no matter how many achievements he garners. “Forty-nine points in 29 minutes, though, that’s unreal,” Bazemore said, referring to Curry’s game against the OKC Thunder on Saturday. “Then we got guys hurting hamstrings, trying to keep up. So, y’all gotta do some research on that.” This quote seems to reference Beal’s injury on the same night in which he dropped 50 points. Beal interpreted it this way as well, going on an absolute tirade.

I stay in my lane!! Focus on BRAD. Idc what another man doing in this league. I’m concerned about me and MY GUYS over here!! Keep that goofy shit over there @24Bazemore !!

He gone find out because I know how to use the @ button @24Bazemore https://t.co/Cr6RROxC1r

Beal concluded his Twitter thread with a GIF of a clown. Bazemore was informed of the situation after the Warriors tilt with the Jazz, and had this to say on the matter: “I guess you can’t joke anymore,” Bazemore said, adding, “I don’t say things to ruffle feathers, but … if you want to know what my loyalty is, it’s to [Curry]. Anyone out there chasing him, it’s gonna be tough.” Asked if he would reach out to Beal to describe what he meant by the remark, Bazemore replied, “There’s nothing really to explain; I was laughing, jokingly, half-heatedly saying it.” He went on to say that there was “nothing malicious about that comment.”

Beal furthered the situation by going on First Take, and saying. “I didn’t like that. I didn’t like the last part of the comment,” Beal said. “The first half of it about what Steph was doing was — I’m with you, bro. Forty-nine in 29 minutes, I think everybody in here can agree that that’s remarkable and truly amazing, so nobody’s arguing that. But I didn’t mention you, my hamstrings have nothing to do with why I go out there and play the game, and for me to injure my hamstring and you kind of make a joke about it, I don’t take that too fondly, honestly, because I take pride in being somebody who — my first four years, I was always labeled as an injury-prone guy. I was always labeled as somebody who couldn’t stay on the floor. So I take pride in my body, I take pride in being on the floor and being available for my team and giving my team the best chance to win. … Don’t make fun of something that’s not funny.”