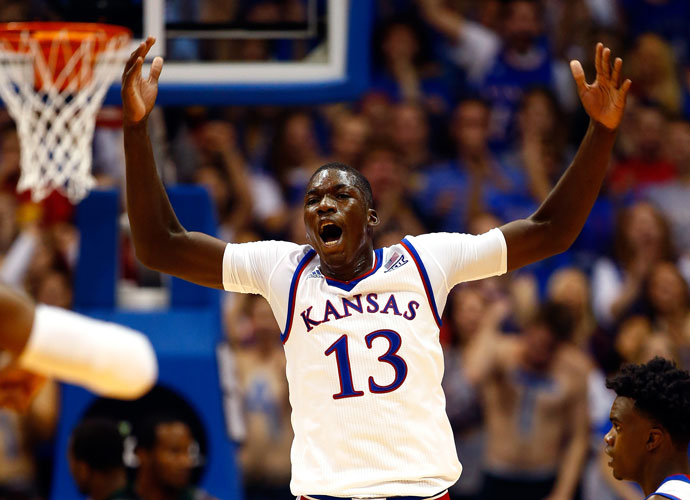 LAWRENCE, KS - DECEMBER 01: Cheick Diallo #13 of the Kansas Jayhawks reacts after a dunk during the 2nd half of the game against the Loyola (Md) Greyhounds at Allen Fieldhouse on December 1, 2015 in Lawrence, Kansas. (Photo by Jamie Squire/Getty Images)

Not only are the Kansas Jayhawks the second-ranked team in the nation, but they may have one of the best players.

On Tuesday night, Perry Ellis scored 20 en route to a 70-57 Kansas win. In the process, he stated his credentials as an All-American.

“This was the best he’s been,” head coach Bill Self said. “I’ll be real candid with you. We’ve said all along he’s been OK. But he hasn’t been great by any stretch. But I thought tonight was the most aggressive he’d been all year long. Hopefully that’s a big step in the right direction because we’re going to have play through him. He’s going to have to be a low-post scorer for us.”

Ellis scored 14 of his 20 points in the first 11 minutes of the game as the Jayhawks roared out to an early lead. The forward said that Self is “always challenging me and that’s making me a better player. So I try to come out and attack and good things will happen knocking down some shots.”

On the whole, the Aztecs were no match for Kansas. “We played a team tonight that there’s nobody, in my opinion, in the country better than,” SDSU coach Steve Fisher said. “They’re good in so many ways. They’re well-coached and they can run body after body after body on you, and not lose, and usually gain, a step when they go to the bench.”

Photo: Cheick Diallo #13 of the Kansas Jayhawks reacts after a dunk during the 2nd half of the game against the Loyola (Md) Greyhounds at Allen Fieldhouse on December 1, 2015 in Lawrence, Kansas. (Photo by Jamie Squire/Getty Images)

Read more about:
Kansas Jayhawks NCAA Basketball Perry Ellis
Listen to the uInterview Podcast!
Get the most-revealing celebrity conversations with the uInterview podcast!