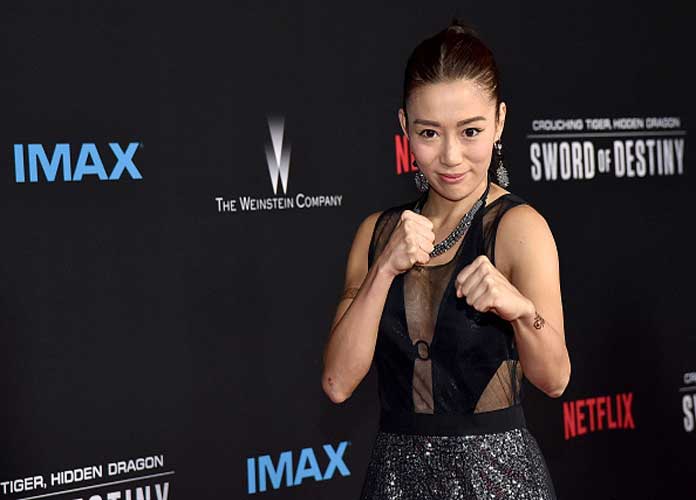 Action Star Ju Ju Chan Explains How To Fly Kick by uSports
JuJu Chan, an action film star and martial artist known for Kung Fu movies like the Netflix-original Chinese-American production Crouching Tiger, Hidden Dragon: Sword of Destiny (2016), sat down with uSports for an exclusive interview in which she explained the technique for executing a flying/jumping side-kick.

JuJu Chan: How to do a flying side-kick

“You start doing the stationary-jump side-kick, and then you do a jump-over side-kick toward some obstacle,” the 29-year-old Honk Kong-American actress told uSports. “If you want to fly over a longer period of time or a longer distance, you need to start increasing your height, the way you jump, your speed.

“If you train every day, you can get to increasing your distance,” she added.

Chan went on to say that she was very pleased with her training thus far, and that she tries to set new and higher goals for herself every day.

“That’s the only way that you can advance your skill, really,” Chan said.

Chan has been dubbed the “Female Bruce Lee” by many martial arts fans, and was even called the next Michelle Yeoh by the Honk Kong Media. She represented Hong Kong in the Taekwon-Do (ITF) World Championship in Bulgaria in 2013. Chan also won a bronze medal in 2014 at the Female 2nd Dan Pattern in the 7th ITF World Championship in Nepal, and is also a Thai Boxing Champion.

The actress and Kung Fu expert also boasts an impressive academic resume. Chan obtained her bachelors in Computer Science and Mathematics from the University of San Francisco in 2005 at the age of 17, and then received her Masters at NYU’s prestigious Tisch School of the Arts in 2007. She left Honk Kong with her parents at the age of 3 to live in San Francisco.

Among the upcoming films Chan is starring in are American action blockbuster “Savage Dog,” in which she is cast alongside Max Zhang and UFC fighter Anderson Silva.

Chan also knows how to use nunchucks and double nunchucks.

Jonathan Lipnicki, Actor And Martial Arts Enthusiast, On How To Defeat Opponents In Jiu-Jitsu [VIDEO EXCLUSIVE]