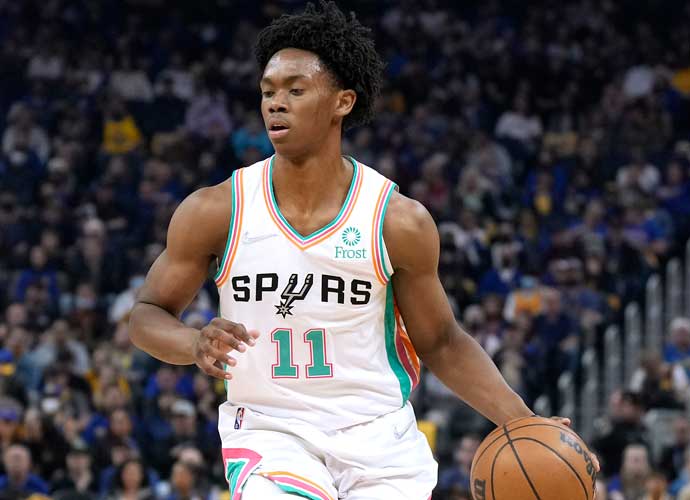 SAN FRANCISCO, CALIFORNIA - MARCH 20: Joshua Primo #11 of the San Antonio Spurs dribbles the ball against the Golden State Warriors in the first half of an NBA basketball game at Chase Center on March 20, 2022 in San Francisco, California. NOTE TO USER: User expressly acknowledges and agrees that, by downloading and or using this photograph, User is consenting to the terms and conditions of the Getty Images License Agreement. (Photo by Thearon W. Henderson/Getty Images)

The Bexar County Sheriff’s Office in Texas confirmed Friday that it was investigating allegations concerning former San Antonio Spurs player Josh Primo. Former team psychologist Hillary Cauthen filed a lawsuit against the organization and Primo on Wednesday. Cauthen is claiming that the former player exposed himself during private meetings on nine occasions and that the team did nothing to stop the behavior.

Bexar County Sheriff’s Office has launched a criminal investigation into Josh Primo, an official told The Athletic. An ex-Spurs psychologist said Thurs. Primo exposed himself 9 times in front of her. She is suing him and Spurs. From @ShamsCharania and me https://t.co/1Pq08ijTQQ

In the past week, Primo has been released from the Spurs and sued by Cauthen and attorney Tony Buzbee, who has previously defended accusers of quarterback Deshaun Watson. Now, he will face a criminal probe for his alleged actions.

When the Spurs waived Primo on Oct. 28, they did not reveal any details about his actions off the court. In a statement at the time, Primo said that he was taking the opportunity to focus on “previous trauma” and his “mental health.”

His attorney, William J. Biggs II, has vehemently denied accusations, stating that Primo was being “victimized” by Cauthen, “who is playing to ugly stereotypes and racially charged fears for her own financial benefit.”

Cauthen’s lawsuit revolves around what she claims was consistent sexual harassment from Primo, behavior that “went unchecked by the organization’s leadership for many months.” The team-appointed psychologist reportedly met with GM Brian Wright in March, two months after she first requested a meeting. At the time, the suit claims that Wright told her that the team would “develop a plan with regard to Primo for the remainder of the season.”

Cauthen was later asked to meet with Primo again, where he allegedly “exposed his penis,” leading her to abruptly end the session. She was also allegedly told by the team that Head Coach Gregg Popovich was aware of the situation and wanted to handle it.

But according to Buzbee, who also defended accusers of quarterback Deshaun Watson, there is little evidence to suggest that Popovich was ever informed. The coach has not commented on the issue.