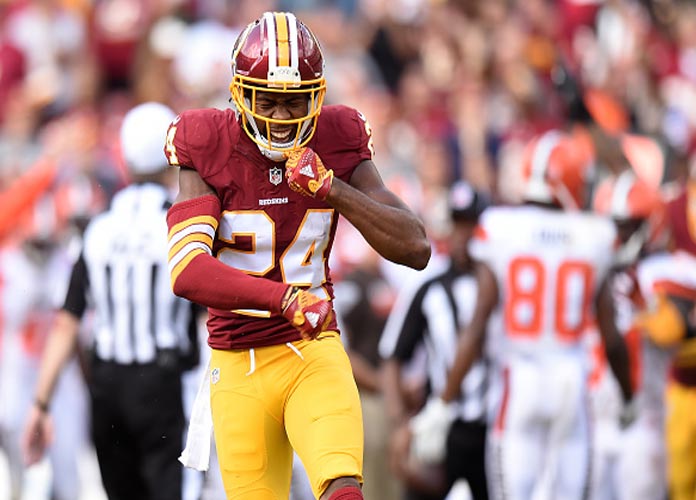 Josh Norman is known at this point for holding a contentions relationship with Odell Beckham Jr. and Dez Bryant, but now the Washington Redskins cornerback has taken his rivalry with those two players to the next level.

In an interview with Bleacher Report on Thursday, Norman ripped the two wide receivers, claiming neither of his two NFC East rivals is an elite wideout and calling Bryant “just a guy” and Beckham “a big kid.”

Bryant and Norman became aggressive with each other following a Week 12 game last year. In television replays, Norman seemed to take a swing and throw a towel at the Cowboys receiver, and both players also exchanged heated words after the contest.

The cornerback then called out Beckham — with whom Norman has shared a tense relationship ever since he played for the Carolina Panthers — for frequently attempting to be someone he’s not, for putting on a “tough guy” facade.

“He tries to be a tough guy. He tries to put on this persona, which he’s not,” Norman said of the New York Giants star. “He does things that he normally wouldn’t do because of all the pressure and added hype that he has to put on his whole persona. He’s not this guy. If you go back and watch the games in which we play compared to the games we don’t play each other, he’s a totally different guy.”

Norman continued explaining how easily Beckham loses his temper, citing one example from last season: “When people get physical, tough, like the Minnesota game, he acts out. He’s a kid. He’s a big kid, man.”

Norman was referring to the Giants’ 24-10 loss to the Vikings in October, during which Beckham drew a penalty for taunting cornerback Xavier Rhodes after getting hit just minutes before halftime. Beckham was fined $24,309 not only for mouthing off to Rhodes, but also for talking back to an official following the play.

Beckham and Norman have exchanged heated words on the field, pushed each other around and butted heads — literally — several times during the last two seasons. Norman’s most aggressive game against Beckham came on Dec. 20, 2015, when he played with the Panthers. Norman received two fines for getting physical with Beckham, who was flagged four times (including for three personal fouls) during that same game. Although the Giants wideout was not ejected, the NFL later banned him for one game.

Following another heated game between Beckham and Norman, the Giants wideout said he doesn’t believe there is a rivalry between them anymore.

“That has been dead for quite some time,” Beckham said. “Put that to an end.”

The Redskins cornerback also said he believes the NFC East rivalry is only going to grow more intense, adding things are “going to get really ugly” in the division.

“Trust me when I tell you, it’s going to be bad blood this year,” Norman warned. “You think the NFC East didn’t like each other before? This year right here? There’s going to be a lot of fines and maybe some suspensions,” he told Bleacher Report.

When asked what he would do if his rivalry with Beckham and Bryant worsened, Norman said: “I’m letting all hell break loose.”

The Redskins cornerback also revealed he holds much more respect for other NFL wideouts like the Atlanta Falcons’ Julio Jones and the Pittsburgh Steelers’ Antonio Brown, both of whom have proven to be among the top receivers in the league after each played a stellar season in 2016. Norman admitted he wishes he could face Jones and Brown twice a year like he does with his division rivals.

“It sucks. It’s the worst. Because I’m just battling ‘guys.’ I’m not battling against something I can call ‘greatness.’ I’m not enhancing my craft,” continued Norman on Beckham and Bryant. “Don’t get me wrong. They’re tough. But they’re not (Julio Jones tough). Not even close. Or Antonio Brown. Someone I can actually get myself better with — my every move.”

LANDOVER, MD – OCTOBER 2: Cornerback Josh Norman #24 of the Washington Redskins reacts after a play against the Cleveland Browns in the fourth quarter at FedExField on October 2, 2016 in Landover, Maryland. (Photo by Mitchell Layton/Getty Images)