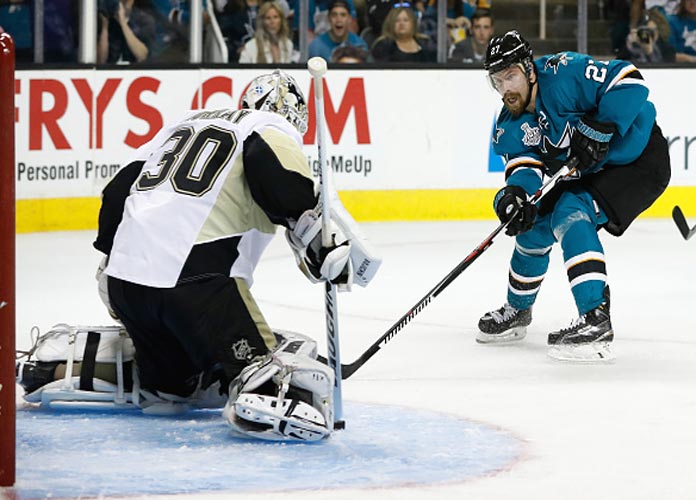 SAN JOSE, CA - JUNE 04: Matt Murray #30 of the Pittsburgh Penguins makes the save on Joonas Donskoi #27 of the San Jose Sharks in Game Three of the 2016 NHL Stanley Cup Final at SAP Center on June 4, 2016 in San Jose, California. The Sharks defeated the Penguins 3-2 in overtime. (Photo by Christian Petersen/Getty Images)

Rookie forward Joonas Donskoi scored 12:18 into overtime to lead the San Jose Sharks to a 3-2 Game 3 home victory against the Pittsburgh Penguins on Saturday.

“You couldn’t have scripted it any better,” Sharks center Logan Couture said. “Overtime win, loud. Fans were into it from the start.”

Doonskoi scored after his linemates won some battles along the boards. Melker Karlsson was in aggressively on the forecheck, and although he lost his stick and a glove, he still managed to force a bad clearing attempt that landed at the feet of teammate Chris Tierney.
The 24-year-old Finnish Doonskoi took the puck from in between Tierney’s skates, circled the net and flared out wide before firing a shot from a bad angle that beat Penguins goalie Matt Murray short-side over his right shoulder.
“I asked [Joonas] if he knew where [the shot] went,” Tierney said. “I don’t think he knows still.”
Doonskoi signed with the Sharks last summer as a free agent after playing in Finland for the previous six years, and has now scored one of the biggest goals in franchise history.
His game-winning goal also, however, exposed a popular NHL goalie technique.
“Too many goalies are staying in the RVH too long,” NHL Network analyst and former league goalie Kevin Weekes told USA TODAY Sports when asked about Donskoi’s goal.
RVH stands for ‘reverse vertical horizon,’ a maneuver that has gained traction at all hockey levels, though particularly in the NHL. The reason behind it: The NHL made the nets shallower before the 2013-14 season and players can now wrap the puck around from the back of the net easier.
The response from players was the RVH, where goalies are on their knees with their skate blade against the post in order to stop those stuff attempts. However, goalies can get in trouble– as Murray noted may have been the case in Saturday’s game– if they stay on their knees when the puck is further from the net, because they leave a larger space open over their shoulders, which is where Doonskoi scored his sixth goal of the playoffs.
“There’s always something you could’ve done differently,” Murray said on Sunday. “I saw the replay for sure. I think if I was a little more upright, he wouldn’t have gotten it over my shoulder. I think he also go lucky with a rolling puck.”
Los Angeles King goalie Jonathan Quick is credited for making the RVH a go-to move as using it helped him win two Stanley Cup titles over the last five seasons.
“It certainly works for Quick, but not every goalie is athletic as he is,” said Corey Hirsch, a former NHL goalie and Sportnet hockey analyst.
Murray, 22, allowed a similar goal in the second round to Washington Capitals forwardJustin Williams in Game 6. He has a .924 save percentage in the postseason, and had 23 total saves on Saturday.
Sharks goalie Martin Jones finished with 40 saves, including the final 22 shots he faced.
Things did not begin well for the Sharks in Game 3. The pre-game introduction highlighted their legends from the first 25 years, and featured former Seattle Seahawks running back and Oakland native Marshawn Lynch opening the dressing room doors to let the team onto the ice. There was also a moment of silence for boxing legend Muhammad Ali, who died Friday.
Pittsburgh defenseman Ben Lovejoy fired a shot from the point at 5:29 of the first period to give the Penguins a 1-0 lead.
San Jose defenseman Justin Braun tied it at 9:34 of the first, the first time in his entire career that he scored in consecutive games.
Pittsburgh forward Patric Hornqvist tipped a point shot from Lovejoy with 43 seconds left in the second period for a 2-1 lead.
Sharks forward Joel Ward tied it 2-2 with 11:12 remaining in the third period, scoring just as a double-minor to Penguins forward Nick Bonino expired. Ward took a pass from Joe Thornton and his shot from a few feet inside the blue line somehow powered through Murray.
Game 4 is set for Monday night at the SAP Center in San Jose.
SAN JOSE, CA – JUNE 04: Matt Murray #30 of the Pittsburgh Penguins makes the save on Joonas Donskoi #27 of the San Jose Sharks in Game Three of the 2016 NHL Stanley Cup Final at SAP Center on June 4, 2016 in San Jose, California. The Sharks defeated the Penguins 3-2 in overtime. (Photo by Christian Petersen/Getty Images)
Read more about:
Joonas Donskoi NHL Pittsburgh Penguins San Jose Sharks Stanley Cup Finals