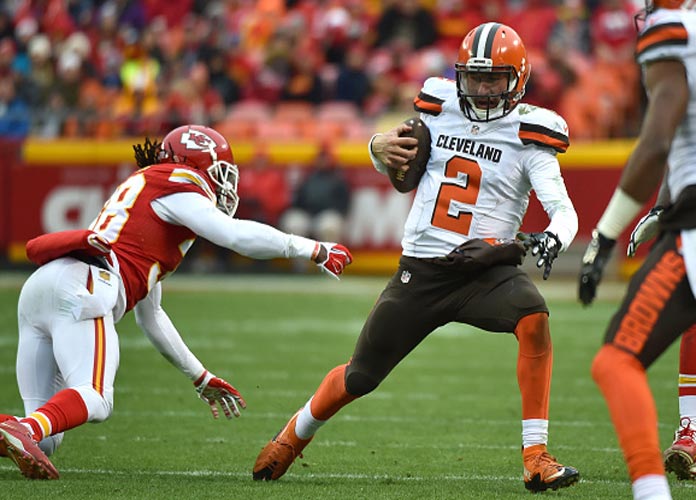 More than two months after his sobriety announcement, hard-partying and scandal-plagued former Cleveland Browns quarterback Johnny Manziel is reportedly working with QB coach George Whitfield in San Diego in the hopes of making an NFL comeback.

FA QB Johnny Manziel has kept a low-profile as he trains for a return. #Saints coach Sean Payton appears to have taken an interest in him.

The #Saints still need a backup QB. Payton could make the most of Manziel’s talent. Drew Brees would be a perfect mentor. A lot makes sense.

Manziel played two season for the Browns after being drafted out of Texas A&M in 2014. He gained a reputation as an unstable person following a series of off-the-field incidents, which began with missing treatments and being late to meetings but ultimately got worse. He threw for 1,675 yards, seven touchdowns and seven interceptions over 14 games in two years. Manziel also rushed for 259 yards and another score.

The former QB also became subject to the NFL’s personal conduct policy following an investigation in Ohio of domestic violence against his ex-girlfriend Colleen Crowley, although all charges against him were dropped. Manziel was suspended, dropped by several agents and even spent ten weeks in a treatment facility in Pennsylvania prior to the 2015 season. He was also accused of property damages, and was given a four-game suspension by the NFL for violating the league’s substance-abuse policy.

Earlier this month, Manziel proposed to his girlfriend, model Bre Tiesi. He told ESPN’s Ed Werder on Jan. 20 that he achieved sobriety without any type of professional help. Since then, Manziel has posted several Instagram pictures of himself in football settings, suggesting his claims about being sober are likely true.

Caption:KANSAS CITY, MO – DECEMBER 27: Johnny Manziel #2 of the Cleveland Browns avoids the tackle of Ron Parker #38 of the Kansas City Chiefs at Arrowhead Stadium during the fourth quarter of the game on December 27, 2015 in Kansas City, Missouri. (Photo by Peter Aiken/Getty Images)