Joe Girardi Out As Yankees Manager After 10 Years - uSports.org 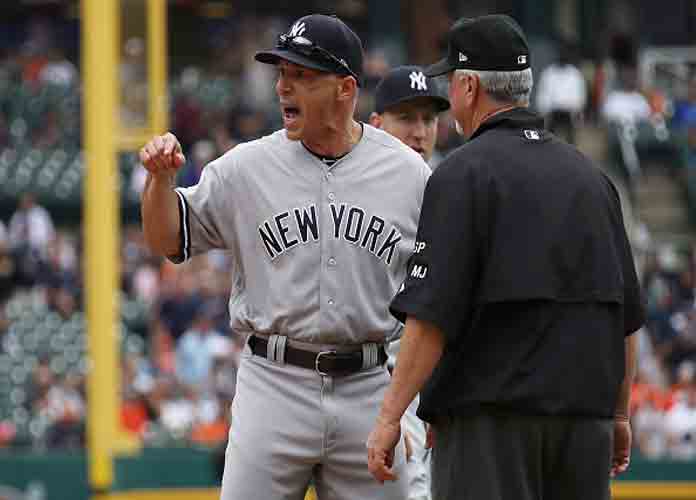 Joe Girardi Out As Yankees Manager After 10 Years

Joe Girardi and the New York Yankees are parting ways after ten years.

The 53-year-old manager revealed his departure in an emailed statement Thursday morning, saying: “With a heavy heart, I come to you because the Yankees have decided not to bring me back.”

“I want to thank Joe for his 10 years of hard work and service to this organization,” Cashman said Thursday in a statement. “Everything this organization does is done with careful and thorough consideration, and we’ve decided to pursue alternatives for the managerial position.”

“As Hal Steinbrenner and I mentioned to Joe directly this week, he has been a tremendous Yankee on the field and away from it, as a player, coach and manager. He has a tireless work ethic, and put his heart into every game he managed over the last decade. He should take great pride in our accomplishments during his tenure, and I wish Joe and his family nothing but success and happiness in the future.”

This year, the Yankees were just one game away from advancing to the World Series. They fell to the Houston Astros in Game 7 of the American League Championship Series.

“I’ve had 10 great years here,” he said. “I feel extremely blessed. God has been good to me, and we’ll see what the future holds.”

Girardi was blamed for the Yankees’ loss in Game 2 of the AL Division Series in Cleveland after he failed to request a replay review on a strikeout that was erroneously called a hit batter.

During Girardi’s decade-long tenure, the Yankees captured one national title (2009) out of their 27 total championships and reached the playoffs six times. He was MLB’s third-longest tenured skipper, behind the Los Angeles Angels’ Mike Scioscia and the San Francisco Giants’ Bruce Bochy.

Dusty Baker, John Farrell and Joe Girardi were a combined 76 games above .500. All led teams to postseason. All lost their jobs. Tough gig.

Cashman’s contract also was up at the end of the season, although he is believed to return after constructing a powerful roster.

Girardi, a former YES Network broadcaster who is a father of three, served as the Florida Marlins manager for one season (2006). A Northwestern graduate, he is also an avid college football fan, and has stated he would be interested in working as an athletic director.

He also thanked fans for their support and said the Yankees’ last six games with him in charge “will remain in my heart forever.”