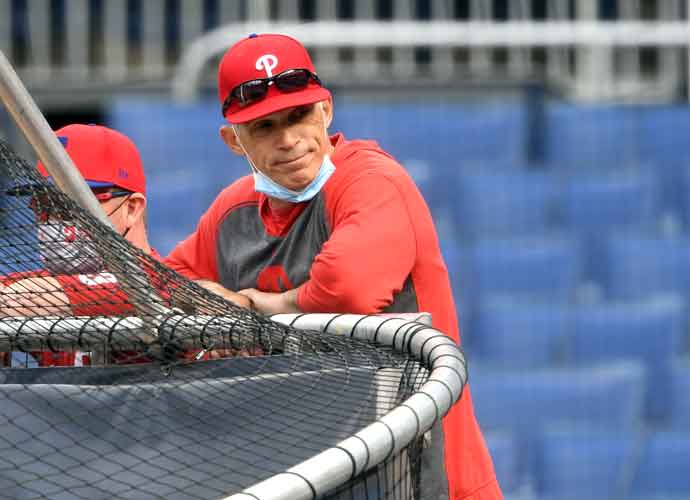 WASHINGTON, DC - MAY 11: Manager Joe Girardi #25 of the Philadelphia Phillies looks on during batting practice before a game against the Washington Nationals at Nationals Park on May 11, 2021 in Washington, DC. (Photo by Mitchell Layton/Getty Images)

Philadelphia Phillies manager Joe Girardi lost his cool and appeared to have a verbal argument with second baseman Jean Segura in the dugout.

The verbal argument occurred during Sunday’s 10-8 loss to the Toronto Blue Jays. The player and manager got into a heated argument in the bottom of the seventh inning after Segura committed an error. Segura attempted to make a fancy catch but instead missed the ball. It frustrated Girardi, especially because it was Segura’s second error of the game. The first error came in the first inning of the game.

The two then appeared to be in a verbal argument in the dugout after the inning. The altercation appeared to get intense as Segura had to be physically restrained by Phillies coach Dusty Wathan.

After the game, Girardi was not happy when asked about the incident by the reporters. The Phillies manager appeared to be defensive and frustrated, refusing to answer the question. “That’s a bench conversation, meant for the bench,” Girardi said. “You can ask all you want; you got everything you’re going to get about it. I’m done with it.”

Joe Girardi made it clear he was NOT going to talk about this incident in the dugout after Jean Segura made a costly error pic.twitter.com/uF3Vbt1FRJ

The frustration comes as the Phillies struggle with errors. During Saturday’s 4-0 loss to the Blue Jays, the manager sounded off on the team for committing three errors. “Catch the ball.. Just catch the ball,” Girardi said. “That’s all we need to do. I don’t know what that is. They work every day. They do their stuff,” he said. “It has to be they’re just not following the ball in their glove, miscommunication. It shouldn’t happen at this level.”