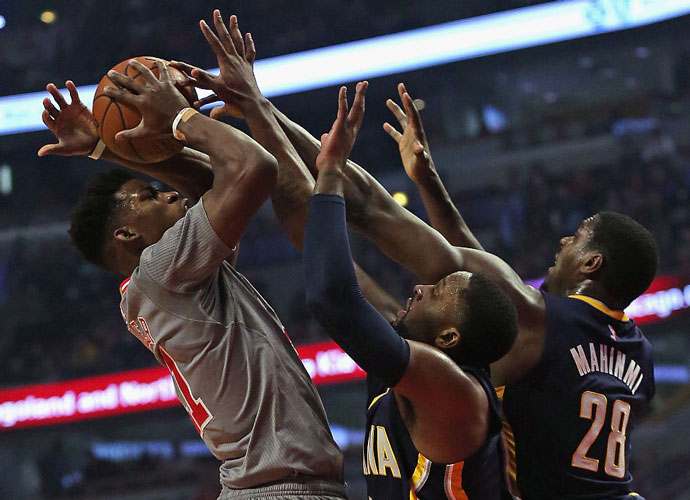 CHICAGO, IL - NOVEMBER 16: Jimmy Butler #21 of the Chicago Bulls tries to get off a shot under pressure from C.J. Miles #0 and Ian Mahinmi #28 of the Indiana Pacers at the United Center on November 16, 2015 in Chicago, Illinois.

Chicago Bulls Guard Jimmy Butler scored 17 points and heavily defended his team against Indiana Pacers forward Paul George on Indiana’s last possession of the game, leading the Bulls to a 96-95 victory over the Pacers on Monday night. Chicago coach Fred Hoiberg stated: “Jimmy made some huge plays for us down the stretch. Not only the last play, but he made some big baskets.”

Coach Hoiberg referred to Butler’s strong defensive play against George in the last seconds of the game, which ended with George attempting a fadeaway shot that missed the basket by a long stretch as the final buzzer sounded. The Bulls have now won three consecutive games, and four in the last five games. The Pacers had also previously won three straight games and six of seven. Pacers coach Frank Vogel said his team got the final play they wanted.

“I don’t think there was a foul,” Vogel said. “He just made a good defensive play.”

Derrick Rose scored 23 points on 9-for-18 shooting for the Bulls, but was forced to leave the game after spraining his left ankle roughly six minutes before the end of the game. Rose said this was just a minor injury, and that nothing was broken or torn. Doug McDermott got 11 points.

Indiana’s injuries included guards George Hill and Rodney Stuckey, as well as rookie Myles Turner. The Pacers trailed by up to 15 points in the third, but Ellis scored eight in the period to help them get within four points at the start of the fourth period.

“We’ve got to learn to build on our leads, but a win’s a win,” Butler said. “I’d rather learn from a win than from a loss.”