Jets Tackle Mekhi Becton Likely Out For The Year – And Fans Feel Awful For Him - uSports.org 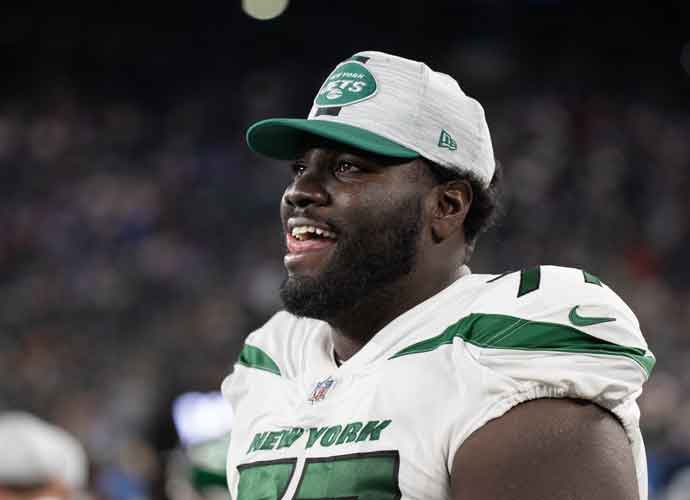 EAST RUTHERFORD, NJ - AUGUST 14: Mekhi Becton #77 of the New York Jets on the sideline during the fourth quarter of a preseason game against the New York Giants at MetLife Stadium on August 14, 2021 in East Rutherford, New Jersey. (Photo by Dustin Satloff/Getty Images)

And unfortunately, his season is most likely over, according to Saleh.

Becton sustained the injury in an 11-on-11 drill Monday during practice.

According to Jets beat reporter Rich Cimini, Becton’s right foot got caught in the grass after getting pushed by defensive end John Franklin-Myers.

Despite limping to the locker room, Saleh wasn’t too concerned and said preliminary tests indicated no serious injury.

However, that all changed once Becton went for an MRI.

The injury marks another major blow for Becton.

The 6-foot-7 364-pound lineman appeared in only one game last year after sustaining a medial collateral ligament (MCL) injury that required surgery.

And the lifelong pain of Jets fans continues, with some only feeling sorrow for the player who has had his early NFL career derailed by injuries.

One fan reflected on Becton’s recovery and tweeted that he “worked his way back from a serious knee injury and got himself in great shape, all while under immense pressure. All of that just to suffer a NEW injury to the same knee. Heart breaks for that man.”

Another said: “Wow this team is just unreal they should [have] took [their] time with him and [took] things slow out for year …. just the JETS DOING JETS [things] KEEP LETTING [Zach] WILSON GET SACKED AND [he’ll] BE OUT FOR THE YEAR SOON

And another thinks this might be it for Becton in the NFL: “I think it is time to FACE facts that Mekhi’s destiny is NOT the #NFL… he is hurt EVERY year. I feel really bad for him… but seriously, he is hurt all the time!”

Here are some other reactions from fans on the Becton news.

Becton down and hurt again pic.twitter.com/cVM4oDxXjs

In fact, Jets general manager Joe Douglas told WFAN this morning that “the wheels are in motion,” when asked about bringing the 36-year-old in.

Becton will meet with a surgeon on Wednesday.