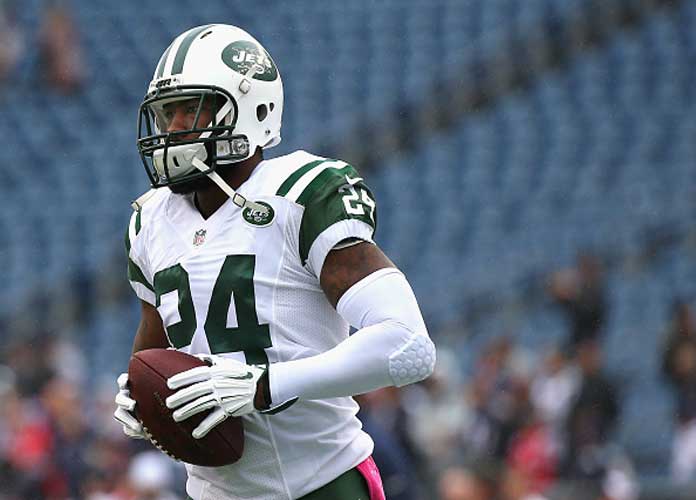 FOXBORO, MA - OCTOBER 25: Darrelle Revis #24 of the New York Jets warms up before a game against the New England Patriots at Gillette Stadium on October 25, 2015 in Foxboro, Massachusetts. (Photo by Jim Rogash/Getty Images)

Revis, 31, was charged with two felony counts of aggravated assault, one felony count each of robbery and conspiracy, and a misdemeanor count of terroristic threats, per ESPN’s Rich Cimini.

The cornerback’s attorney, Blaine Jones, told ESPN that he was attempting to reach Revis, a four-time All-Pro, by phone Thursday night to arrange for him to surrender to police. It was unknown whether Revis turned himself in.

There are conflicting reports concerning what occurred.

According to a police statement, two men ages 21 and 22 said Revis punched them in a verbal altercation at 2:43 am ET Sunday in Pittsburg’s South Side. Witnesses said the two men were unconscious for 10 minutes, police stated.

Revis, who grew up in Pennsylvania and played for the University of Pittsburgh, required medical attention, Jones told ESPN without revealing the nature and severity of his client’s injuries.

Police stated one of the two men, Dallas Cousins, was walking down a street when he saw someone whom he believed resembled Revis. Cousins approached Revis, who confirmed his identity. Cousins thus began recording the NFL star on his cellphone and continued to follow him.

“At some point, Revis snatched the cellphone away and attempted to delete the video,” the police statement said.

According to the police statement, Revis tossed the cellphone onto the street. The other man, 21-year-old Zacheriah Jarvis– who is Cousins’ roommate– helped retrieve the cellphone. An argument ensued, and then an unidentified man came to help Revis.

A witness, Nathan Watt, told police that Revis approached him after Cousins and Jarvis were knocked out. Watt quoted Revis as saying, “I got more guys coming.” The complaint added that Revis “stepped within a foot of his face with an aggressive demeanor on his face, fists clenched, and stated, ‘Do you want to be next?'”

Watt said he didn’t know whether Revis or the man who helped him knocked out Cousins and Jarvis, telling police, “I don’t know. It happened so fast.”

Cousins was diagnosed with an orbital floor fracture.

Jones stated Revis had returned home to Pittsburgh to visit family and friends and stopped by the South Side to visit a real-estate site he’s developing. Revis was “physically assaulted while at the location by a group of at least five people,” Jones said. He also added, when asked why Revis was visiting the site so late at night, that the cornerback “didn’t want to be around a lot of people.”

Revis is facing an uncertain future with the Jets. Following a disappointing season– which he called the worst of his career– the NFL star is due a $2 million roster bonus on March 11, plus another $13 million in base salary (including $6 million guaranteed).

Revis signed a five-year, $70 million deal with the Jets in 2015 after spending one year each with the Tampa Bay Buccaneers and New England Patriots.

FOXBORO, MA – OCTOBER 25: Darrelle Revis #24 of the New York Jets warms up before a game against the New England Patriots at Gillette Stadium on October 25, 2015 in Foxboro, Massachusetts. (Photo by Jim Rogash/Getty Images)