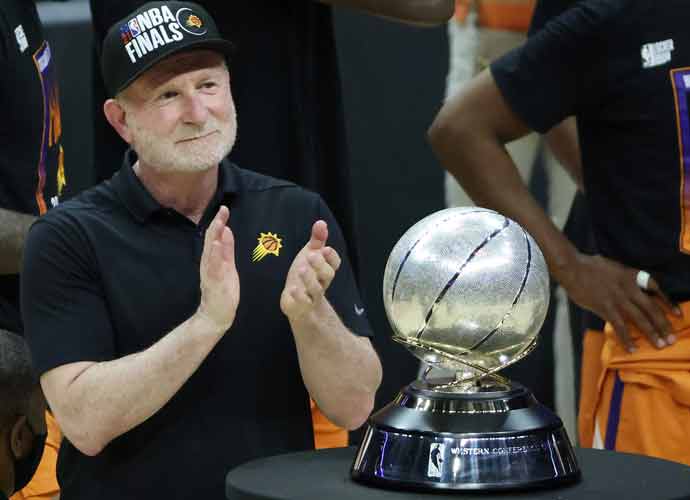 LOS ANGELES, CALIFORNIA - JUNE 30: Owner Robert Sarver stands with the Western Conference Championship trophy after the Suns beat the LA Clippers to win the series in Game Six of the Western Conference Finals at Staples Center on June 30, 2021 in Los Angeles, California. The Suns beat the Clippers to advance to the NBA Finals. NOTE TO USER: User expressly acknowledges and agrees that, by downloading and or using this photograph, User is consenting to the terms and conditions of the Getty Images License Agreement. (Photo by Harry How/Getty Images)

Phoenix Suns and Mercury owner Robert Sarver announced Wednesday that he will sell his NBA and WNBA teams in the wake of a one-year ban for bullying and harassment in the workplace. A new report suggests that a quartet of high-profile billionaires could fight for the right to take over.

Ramona Shelburne on some notable names to look out for as far as who will be the next owner of the Phoenix Suns.#NBATwitter pic.twitter.com/fKNNeOynsQ

Sarver’s decision to sell the team comes after months of speculation and criticism of his behavior as owner of the two teams. In a statement, he cited an overwhelmingly negative public reaction as his motivation to sell.

“But in our current unforgiving climate, it has become painfully clear that that is no longer possible – that whatever good I have done, or could still do, is outweighed by things I have said in the past,” Sarver said. “For those reasons, I am beginning the process of seeking buyers for the Suns and Mercury.”

Following the NBA’s decision to punish Sarver for misconduct, multiple NBA players and commentators came forward and said that the temporary ban and a $10 million fine weren’t enough. LeBron James originally said that the league “got this wrong,” but celebrated following the sale announcement.

I’m so proud to be a part of a league committed to progress! https://t.co/c89Ad7AKZO

Though Sarver only owns about one-third of the Suns, he will oversee the full sale of the team, reminiscent of Shelly Sterling’s sale of the Los Angeles Clippers in 2014 after former owner Donald Sterling was banned from the league.

According to Sportico’s most recent valuation, the Suns are worth $1.92 billion. Sarver bought the team for $401 million in 2004. The profit he stands to make in the sale will far exceed the fine he will have to pay for using racist and misogynist language and mistreating employees.