Jay Cutler Reveals That He Is Feeling Effects Of CTE - uSports.org 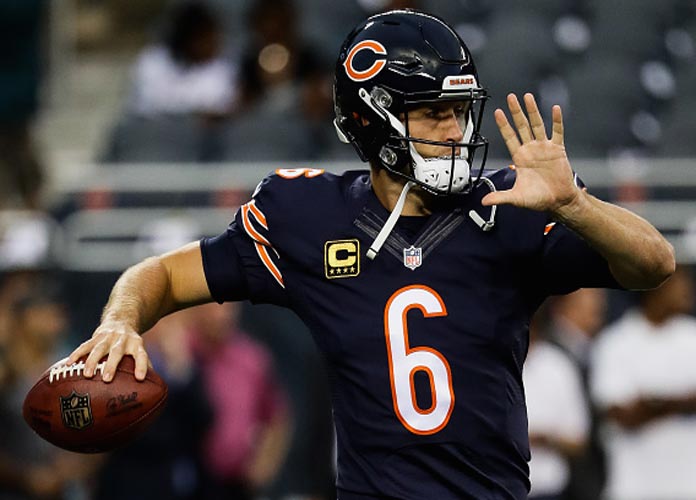 CHICAGO, IL - SEPTEMBER 19: Quarterback Jay Cutler #6 of the Chicago Bears warms up prior to the game against the Philadelphia Eagles at Soldier Field on September 19, 2016 in Chicago, Illinois. (Photo by Jonathan Daniel/Getty Images)

Jay Cutler Reveals That He Is Feeling Effects Of CTE

Retired NFL quarterback Jay Cutler revealed in an episode of Barstool Sports’ Pardon My Take that he’s starting to feel the neurological effects of repeated blows to the head from playing.

The hosts, Dan “Big Cat” Katz and “PFT Commenter,” were stunned when Cutler revealed that he believes he will get CTE (chronic traumatic encephalopathy). The hosts asked Cutler about his health now that he is three years removed from the league. The former quarterback responded by saying that he is physically fine, but that memory is an issue. “I would say memory and stuff like that,” the former Pro Bowler said. “CTE is coming at some point… without a doubt.”

Cutler estimates that he had about 15 concussions throughout his NFL career. “The Texans one was bad,” Cutler said, talking about the concussions he received. “I think we were playing Washington and I got — it was a DB, I forgot who it was — and I just got slung around. He just slung me around and threw me down, and the side of my head hit, and that’s one of the only times I was out. I was out for a second, then got up and walked off.”

“I don’t know. I think if you play long enough, it’s gonna happen to you,” he later remarked.

Chronic traumatic encephalopathy (CTE) is a neurodegenerative disease that is believed to be caused by repeated trauma towards the head. CTE cannot be diagnosed in a living person because there is no definitive test that can prove an individual has CTE. There are only signs and symptoms that are associated with progressive brain disease. CTE can only be diagnosed posthumously. CTE is seemingly linked to NFL players because of the various hits to the head the players take. In addition, various former NFL players who were diagnosed with CTE died by suicide.

Cutler is currently taking precautions for CTE. The retired quarterback said that he is undergoing NAD therapy (Nicotinamide Adenine Dinucleotide), an IV drip that is considered to be a promising treatment for CTE.

“I’m doing as much as you possibly can do,” Cutler said of taking precautionary measures to combat CTE onset.

Cutler played in 153 games during his career. He recorded 35,133 passing yards, 227 touchdown passes and 160 interceptions.

Read more about:
CTE Jay Cutler NFL Sports
Listen to the uInterview Podcast!
Get the most-revealing celebrity conversations with the uInterview podcast!