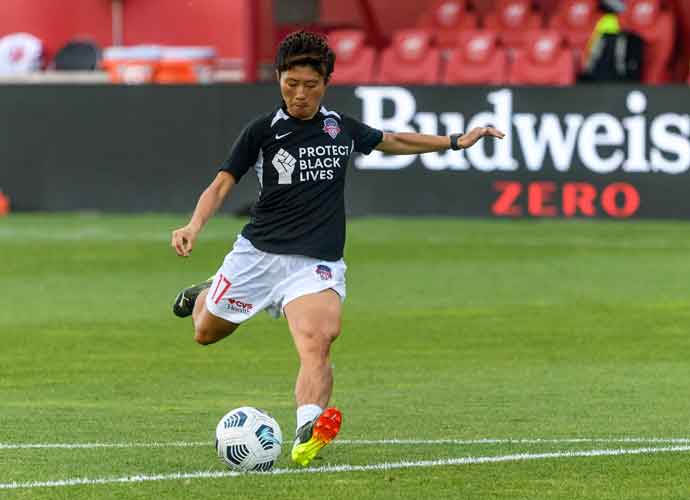 BRIDGEVIEW, IL - JUNE 19: Kumi Yokoyama #17 of the Washington Spirit warms up before a game between Washington Spirit and Chicago Red Stars at SeatGeek Stadium on June 19, 2021 in Bridgeview, Illinois. (Photo by Daniel Bartel/ISI Photos/Getty Images)

Washington Spirit‘s Kuymi Yokoyama came out as transgender in an interview on her former Japan teammate Yūki Nagasato‘s Youtube channel.

This announcement makes Yokoyama one of the highest-profile names in Japanese sports to come out as transgender. Yokoyama said living in Germany and the United States played a major role in her decision to go public.

“I’ve dated several women over the years but I had to stay closeted in Japan,” Yokoyama said in the interview translated by The Japan Times. “In Japan I’d always be asked if I had a boyfriend, but [in the United States] I’m asked if I have a boyfriend or girlfriend.”

“When my girlfriend said there was no reason for me to stay closeted, it really hit me. Coming out wasn’t something I was enthusiastic about, but if I think about my life going forward, it would be harder to live closeted so I found the courage to come out.”

We support and are so proud of you Kumi💙🏳️‍⚧️Thank you for showing the world it's ok to embrace who you are! https://t.co/Gi7btIAT7l

Yokoyama said she received surgery to remove breast tissue seven years ago without hormonal treatments since receiving hormones would put her at risk of failing drug tests. Yokoyama said she plans to undergo further gender-affirming procedures after she retires.

Yokoyama accredited OL Reign midfielder Rebecca Quinn‘s decision to come out as transgender in 2020 as an inspiration to become an activist for transgender rights.

“Lately the word ‘LGBTQ’ has become more commonly known in Japan and been covered by the media, but people in my position aren’t able to raise our voices and talk about it,” Yokoyama said. “Japan may be a small country, but if all of us speak up together then we can help raise awareness.”

The 27-year-old Yokoyama has tallied one goal for the Spirit in their NWSL Cup competition.