Jake Paul And Floyd Mayweather Get Into Scuffle After Press Conference - uSports.org 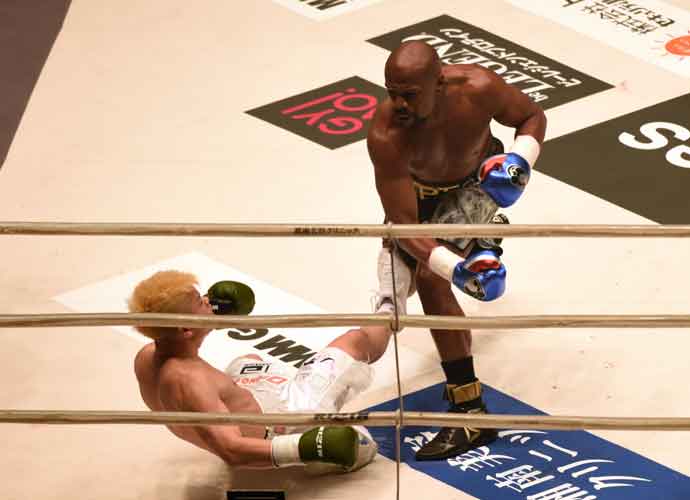 SAITAMA, JAPAN - DECEMBER 31: Floyd Mayweather of the United States knocks down Tenshin Nasukawa of Japan during the RIZIN. 14 at Saitama Super Arena on December 31, 2018 in Saitama, Japan. (Photo by Hiroki Watanabe/Getty Images)

Jake Paul And Floyd Mayweather Get Into Scuffle After Press Conference

Floyd Mayweather Jr and Jake Paul got into a heated exchange that resulted in Paul stealing Mayweather’s hat.

The incident occurred while Mayweather was being interviewed about his upcoming exhibition fight against Paul’s older brother, Logan. The 44-year-old boxing legend called out the Paul brothers and referred to them as “fake fighters” during his face-off with Logan Paul and claimed that he will fight both of them at once. “I don’t have to talk about what I’m going to do,” Mayweather said. “The world knows what I’m going to do, I’m willing to fight both in the same night.”

The comment did not sit well with the younger Paul brother, who then ran up to Mayweather and got into a scuffle with the undefeated boxer. The two got into a verbal argument, and it ended with Jake taking Mayweather’s hat and saying, “I gotcha hat,” before trying to run away. Jake did not make it far before being restrained by the boxing legend’s bodyguards and the boxer. It appeared that punches were thrown at Jake while he was being restrained. After the two were separated, a heated Mayweather yelled, “I’ll kill you mother****er,” towards Jake. Jake, on the other hand, admitted that he was punched in the face during the scuffle. “One of Floyd’s 30 bodyguards got a clean shot on me in the eye,” Jake Paul said.

It got heated at the Floyd Mayweather-Logan Paul press conference after Jake Paul took Mayweather’s hat.

It has been reported that the younger Paul has been banned from attending the scheduled fight. In a video posted on Logan’s Instagram story, he tells his brother: “They’re not letting you into the fight. You’re literally banned from the Hard Rock Stadium on June 6.” Jake then responded, “Swipe up, I’ll buy the fight. I don’t care.”

Mayweather is scheduled to fight Logan Paul on June 6 at the Hard Rock Stadium. Mayweather is 50-0 and regarded as one of the greatest fighters of all time. Logan Paul is 0-1 in his boxing career so far, losing to fellow YouTuber KSI.