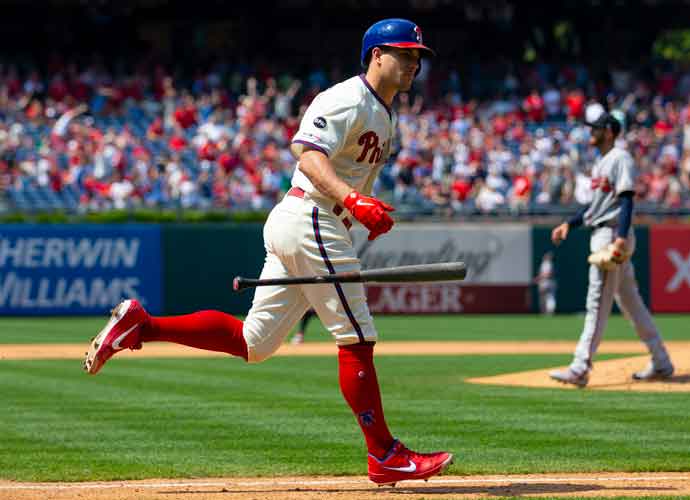 PHILADELPHIA, PA - JULY 28: J.T. Realmuto #10 of the Philadelphia Phillies rounds the bases after hitting a grand slam in the bottom of the fifth inning against the Atlanta Braves at Citizens Bank Park on July 28, 2019 in Philadelphia, Pennsylvania. The Phillies defeated the Braves 9-4. (Photo by Mitchell Leff/Getty Images)

J.T. Realmuto Out At Least Two Weeks With Broken Thumb

J.T. Realmuto suffered a broken thumb during a pre-camp workout last week. He was catching a bullpen session thrown by Phillies newcomer Jose Alverado when a breaking ball bounced in the dirt and hit the catcher on his right thumb. Realmuto didn’t realize the severity of the injury, as he believed it was a simple bone bruise. However, after struggling to throw the baseball on Wednesday, further evaluation was required. An MRI revealed a fracture, meaning he will be placed in a cast that will immobilize his hand for the next couple weeks. This will cause Realmuto to miss most of spring training. He will be reevaluated in two weeks by medical personnel.

According to a tweet from NBC10 Philadelphia, “Phillies catcher J.T. Realmuto has a small fracture at the base of his right thumb, manager Joe Girardi said on Thursday. Realmuto expressed confidence that he would be ready to open the season on April 1.”

Phillies catcher J.T. Realmuto has a small fracture at the base of his right thumb, manager Joe Girardi said on Thursday. Realmuto expressed confidence that he would be ready to open the season on April 1. https://t.co/GtXvzSSdeJ pic.twitter.com/rnLMzfHQj8

This injury comes on the heels of a massive contract extension. After hitting .266 with 11 homers and 32 RBIs during the abbreviated 2020 season, Realmuto signed the most expensive contract for a catcher in MLB history. He agreed to a five-year, $115.5 million extension. He has been one of the most dominant catchers in baseball, leading all players at the position in WAR (Wins Above Replacement – 10.1), RBIs (189) and stolen bases (16) since 2018. He is also second in slugging percentage (.489) and OPS (.825) during that same time span.

The Phillies finished last season with a 28-32 record, missing the postseason. Realmuto figures to be a key piece in Philadelphia’s success for the foreseeable future. Although the injury will prevent the veteran catcher from participating in most of spring training, it does not appear that the injury is severe enough to keep the catcher from suiting up for the regular season.

Speaking with reporters, Realmuto expressed confidence that he would be ready to open the season on April 1, but he also said he won’t rush back if doctors determine that he needs more time to heal.

“I’m not worried,” he said. “I’m not very worried about my thumb, so if I was a Phillies fan, I wouldn’t be too worried.”

In a competitive NL East division in which the Atlanta Braves and New York Mets are both looking to make runs into the postseason, the Phillies will need a healthy Realmuto if they want to contend.