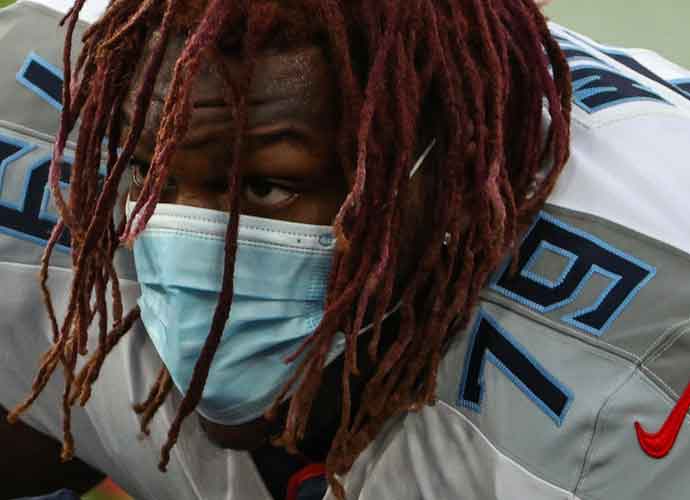 BALTIMORE, MARYLAND - NOVEMBER 22: Offensive tackle Isaiah Wilson #79 of the Tennessee Titans wears a face covering as he celebrates after defeating the Baltimore Ravens at M&T Bank Stadium on November 22, 2020 in Baltimore, Maryland. Players wore face coverings at the end of the game due to the Covid-19 pandemic. (Photo by Patrick Smith/Getty Images)

Isaiah Wilson Says He’s ‘Done With Football As a Titan,’ In Since-Deleted Tweet

On Monday night, 2020 first-round NFL draft pick Isaiah Wilson posted on Twitter that he is “done with football as a Titan” before deleting the tweet soon after. The tweet came approximately a week after Wilson was put on notice by the Tennessee Titans GM Jon Robinson.

What did it say?

Team GM Robinson addressed Wilson’s status during a virtual news conference on Tuesday, telling reporters he has not spoken to Wilson since putting him on the NFI list. He also suggested that Wilson “makes a determination on whether he wants to do what it takes to play pro football.”

Wilson was the 29th overall pick in April’s NFL draft but played only four snaps in his rookie season as a result of him being placed on the non-football injury list last December. Before that, Wilson was on the reserve/COVID-19 list twice last year; during training camp and in October.

Additionally, Wilson had a few legal issues to deal with. The first of two incidents was when police had to break up an off-campus party at Tennessee State University that Wilson had attended during training camp. Wilson went to the second-floor balcony where he almost jumped, according to the police. Wilson was issued a trespassing warning.

The second situation occurred when Wilson was arrested and charged with a DUI in September. The rookie right tackle lost control of his vehicle and struck a concrete wall.

The Titans signed Wilson to a four-year, $11.6 million contract in August. The team would have a $5.4 million salary-cap charge if Wilson is released.