Isaiah Thomas, Celtics Rally From 13 Down In 4th To Roll Past Timberwolves 99-93 - uSports.org 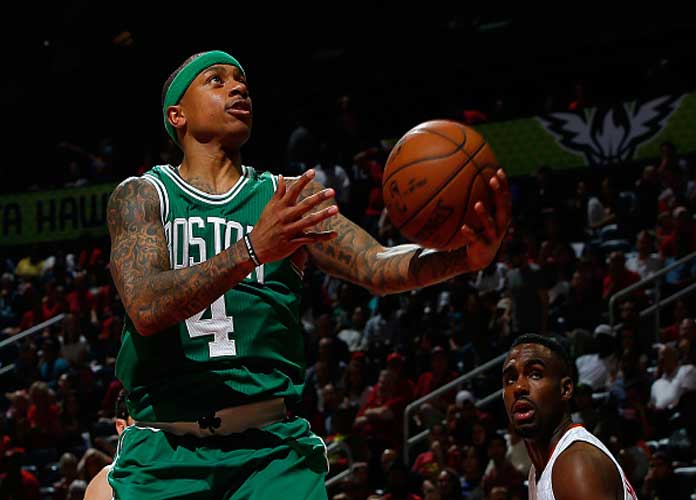 ATLANTA, GA - APRIL 26: Isaiah Thomas #4 of the Boston Celtics lays in a basket against the Atlanta Hawks in Game Five of the Eastern Conference Quarterfinals during the 2016 NBA Playoffs at Philips Arena on April 26, 2016 in Atlanta, Georgia.

Isaiah Thomas, Celtics Rally From 13 Down In 4th To Roll Past Timberwolves 99-93

Isaiah Thomas scored 29 points, and the Boston Celtics rallied from 13 points down in the fourth quarter to defeat the Minnesota Timberwolves 99-93 in Minneapolis on Monday night.

isaiah Thomas, Celtics Rally From 13 Down In 4th To Roll Past Timberwolves 99-93

Al Horford added 20 points, six rebounds and five assists for the Celtics, who trailed 81-68 after three. Boston opened the fourth with a 17-0 run to gain the lead and held on to reach its second consecutive win.

”I think give us credit for playing a little harder than them and making them think a little more and getting them uncomfortable,” Thomas said.

Karl-Anthony Towns had 27 points and 18 rebounds for the Timberwolves. Gorgui Dieng added 20 points and 10 rebounds, but Andrew Wiggins was only 5 for 18 and Minnesota scored three points in the first nine minutes of the fourth.

Boston’s Terry Rozier scored a career-high 12 points and played a key role in the Celtics’ explosion in the first 6 minutes of the fourth.

Though they have typically struggled in the third quarter, the Timberwolves outscored the Celtics 29-26 in that period, only the second time this season that has happened against any of their opponents.

Jonas Jerebko and Rozier opened the fourth with 3-pointers, and Rozier added another long ball and a steal and dunk to push Boston ahead.

Towns was the only player to score for Minnesota in the first 11 minutes of the fourth, converting a three-point play with 5:18 remaining for their first bucket and sinking a 3-pointer with 2:38 left.

The Celtics outscored the Timberwolves 31-12 in the fourth as Minnesota shot 5 for 25.

”They were definitely pressing,” Celtics guard Marcus Smart said. ”Guys were into guys, we were making everything hard. You could definitely tell they were pressing to find a great shot.”

The Wolves also out-rebounded the Celtics 51-39, including 16-6 on the offensive glass. But Minnesota missed eight free throws in total.

”I think we have to play tougher with a lead,” Timberwolves coach Tom Thibodeau said. ”And the big thing for us is to improve and learn.”

ATLANTA, GA – APRIL 26: Isaiah Thomas #4 of the Boston Celtics lays in a basket against the Atlanta Hawks in Game Five of the Eastern Conference Quarterfinals during the 2016 NBA Playoffs at Philips Arena on April 26, 2016 in Atlanta, Georgia.