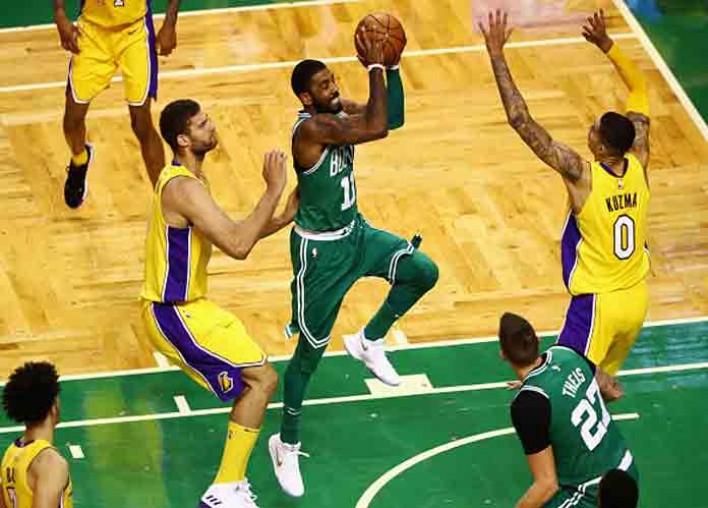 BOSTON, MA - NOVEMBER 08: Kyrie Irving #11 of the Boston Celtics drives to the basket during the fourth quarter against the Los Angeles Lakers at TD Garden on November 8, 2017 in Boston, Massachusetts. (Photo by Tim Bradbury/Getty Images)

The Boston Celtics have been hit with multiple injuries this season, but luckily for them they are also amassing victories.

Despite missing Al Horford and Jayson Tatum to injuries, the Celtics (10-2) secured a 107-96 home victory over the Los Angeles Lakers on Wednesday night for their tenth straight win.

Horford was placed on concussion protocol earlier Wednesday, while rookie forward Tatum left late in the second quarter after experiencing soreness in his right ankle.

Coach Brad Stevens said Tatum had X-rays and was fitted with a walking boot as a precaution. He will be re-examined on Thursday.

”Until we have only four left, I guess we’re just gonna keep playing,” Stevens said.

Last season, Horford sustained a concussion that sidelined him for nine games.

“I don’t think this is as bad as the concussion he had last year,” Ainge said on 98.5 the Sports Hub’s Toucher & Rich show. “But listen, with a concussion you have to be really cautious. The symptoms got a little worst over the course of a couple days.”

This year, Horford was concussed after he took an elbow to the head from Kent Bazemore in Monday’s 110-107 victory at Atlanta. The ten-year veteran Dominican power forward’s injury comes during one of the best seasons of his career.  In 11 games, Horford is averaging 14.6 points, 9.2 rebounds and 4.7 assists per game. He is rumored to be a contender for the Defensive Player of the Year Award.

The Celtics led by 20 points in the second quarter before allowing their advantage to fall to two in the third. Aron Baynes tied his career high with 21 points and Kyrie Irving contributed 19.

Marcus Smart takes flight for the denial in tonight’s @JetBlue Play of the Game! pic.twitter.com/vb9jAika7v

Brandon Ingram and Jordan Clarkson led the Lakers — who had six turnovers in the final period — with 18 points each. Julius Randle added 16 points and 12 rebounds.

Lakers rookie Lonzo Ball was booed in his first visit to TD Garden. The No. 2 overall pick was jeered whenever he touched the ball, and finished with nine points, six assists and five rebounds, making just 4 of 15 from the field.

Irving also injured his right leg, which was examined between the third and fourth quarters. He returned with just over six minutes remaining and sank back-to-back baskets to push the hosts’ lead back to 100-90.

Celtics forward Marcus Morris said he believes fans shouldn’t be so harsh on Ball, though he added the rookie has a “big mouth” and that he thinks his father LaVar Ball is likely the main reason behind fans’ booing.

The Lakers (5-6) next visit Washington on Thursday night, while the Celtics host Charlotte on Friday night.

BOSTON, MA – NOVEMBER 08: Kyrie Irving #11 of the Boston Celtics drives to the basket during the fourth quarter against the Los Angeles Lakers at TD Garden on November 8, 2017 in Boston, Massachusetts. (Photo by Tim Bradbury/Getty Images)