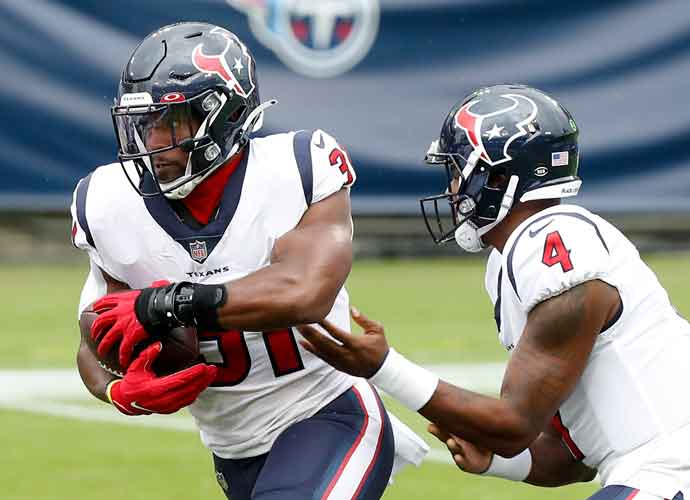 NASHVILLE, TENNESSEE - OCTOBER 18: Running back David Johnson #31 of the Houston Texans takes the hand off from quarterback Deshaun Watson #4 in the first quarter against the Tennessee Titans at Nissan Stadium on October 18, 2020 in Nashville, Tennessee. (Photo by Frederick Breedon/Getty Images)

The Houston Texans have reworked the contract of running back David Johnson.

Houston traded for the running back in March 2020 in a deal that sent wide receiver DeAndre Hopkins to the Arizona Cardinals.

Last season, the running back ran for 691 yards and six touchdowns. Johnson only played in 12 games for Houston because he missed three games due to a concussion, and one game because he was placed on the reserve/COVID-19 list.

Johnson was selected to his lone Pro-Bowl in 2016 when he set career highs for the Cardinals. In 2016, he rushed for 1,239 yards, 16 touchdowns, and caught 80 passes out of the backfield. Johnson’s Pro-Bowl days are likely behind him, but he can still be an asset to the Texans, no matter who is quarterbacking the team.