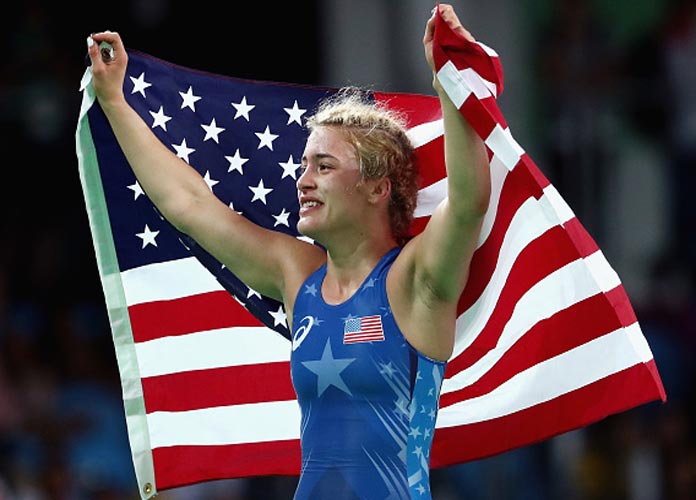 Helen Maroulis added her name on Thursday to the list of American Olympians to make history at the Rio Games this summer.

The 24-year-old wrestler from Maryland defeated one of the greatest wrestlers in the world, Japan’s Saori Yoshida, to win the gold in the 53kg weight class.

Yoshida, 33, is widely considered to be a wrestling legend. She is a 13-time world champion and a three-time reigning Olympic champion.

Maroulis, a first-time Olympian who lost weight to compete in Rio, defeated Yoshida, who had not lost a match in four years, 4-1.

The first period ended with Yoshida leading 1-0 after Maroulis failed to convert when put on the 30-second shot clock. The American came out strong in the second period, securing two takedowns to finish 4-1.

Maroulis’s win adds to a recent tear that includes her first-ever world title at the 2015 world championships in Last Vegas (in the 55kg division); she currently holds the longest winning streak of all American wrestlers.

The medal ceremony was incredibly emotional, to say the least, as both finalists cried on the podium. Maroulis mouthed “The Star-Spangled Banner” with tears running down her face while Yoshida seemed inconsolable, sobbing after ending her 14-year streak of capturing either a world or Olympic title.

“I’ve dreamed of this my whole life,” Maroulis said. “I put it on this pedestal.”

“I’ve been dreaming about wrestling Saori for so long,” Maroulis said. “She’s a hero. She’s the most decorated wrestler in the sport. It’s such an honor to wrestle her.”

Maroulis was on a two-year streak of her own.

“I should have attacked sooner and faster, but the opponent was stronger than me,” Yoshida said. She also added that she has not yet decided whether or not she will compete in the 2020 Games in the capital of her home country, in Tokyo.