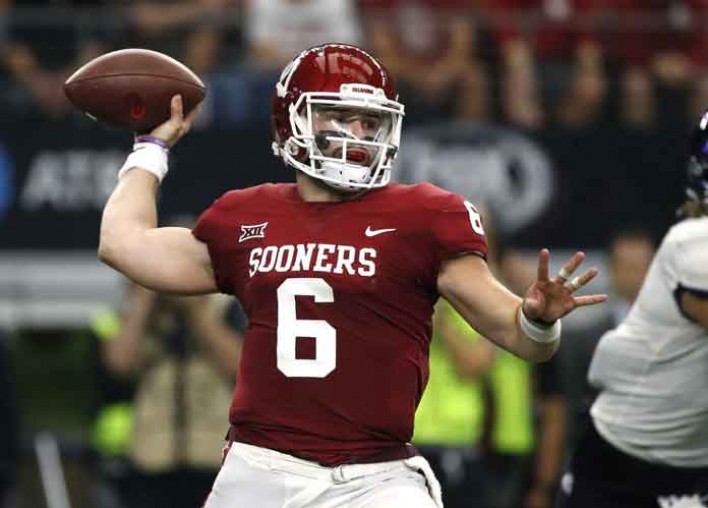 ARLINGTON, TX - DECEMBER 2: Baker Mayfield #6 of the Oklahoma Sooners throws against the TCU Horned Frogs in the first half during the Big 12 Championship at AT&T Stadium on December 2, 2017 in Arlington, Texas. (Photo by Ron Jenkins/Getty Images)

Oklahoma quarterback Baker Mayfield is among three players revealed on Monday as finalists for the 2017 Heisman Trophy.

The winner of the award, which goes to college football’s most prolific player, will be announced Saturday at the Downtown Athletic Club in New York.

Excluding Jackson since he’s still in college, eight of the past nine Heisman winners have been selected in the first round of the NFL draft.

Mayfield is believed to be the favorite to win this year’s award, despite off-field problems that have hurt his chances. The senior is a Heisman finalist for the second straight year after leading the Sooners (12-1) to a Big 12 title and a berth in the College Football Playoff. Oklahoma will play Georgia in the Rose Bowl on Jan. 1.

He leads the FBS this season with 46 total touchdowns, and is the FBS all-time leader in passer efficiency rating (176.03). Mayfield was removed as team captain a few weeks ago after making a lewd gesture during Oklahoma’s victory over Kansas. During the offseason, he was arrested on charges of public intoxication, fleeing, disorderly conduct and resisting arrest. He eventually accepted a plea deal in that case.

Jackson is seeking to become the second two-time Heisman winner and first since Archie Griffin (Ohio State) accomplished the feat in 1974-1975. The QB has been very impressive both last year and this year, during which he has thrown for 3,489 yards and 25 TDs and rushed for 1,443 yards and 17 TDs. He leads the FBS with an average of 411 yards per game. His chances of repeating as a Heisman winner seem slim, however, as Louisville is not ranked after going 8-4 this season.

Love, meanwhile, is enjoying a breakout season at Stanford, emerging as a star after playing in the shadow of 2017 first-round pick Christian McCaffrey, who now plays for the Carolina Panthers. Love rushed for 1,973 yards this season (second in the FBS) and averages 8.3 yards carry.

ARLINGTON, TX – DECEMBER 2: Baker Mayfield #6 of the Oklahoma Sooners throws against the TCU Horned Frogs in the first half during the Big 12 Championship at AT&T Stadium on December 2, 2017 in Arlington, Texas. (Photo by Ron Jenkins/Getty Images)