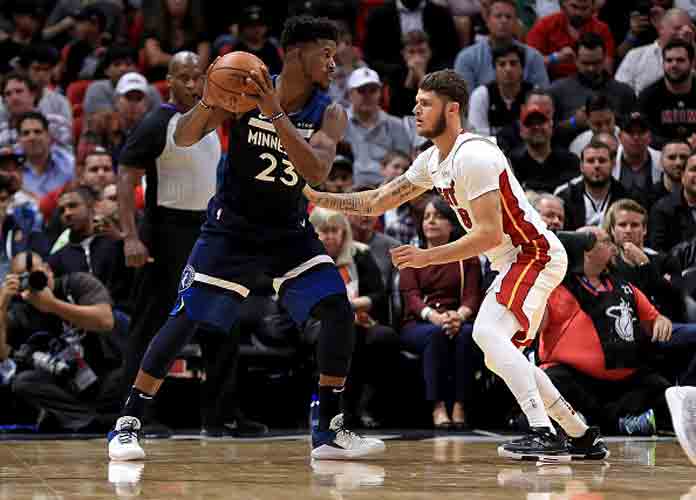 Dion Waiters and rookie Bam Adebayo delivered a stellar performance on Monday night, but the Miami Heat still fell to the Minnesota Timberwolves 125-122 in overtime at AmericanAirlines Arena.

Waiters scored 33 points (a career-high tie) and power forward Adebayo — the 14th overall 2017 pick out of Kentucky — added 13 points and 13 rebounds for his first career double-double.

“These are the games right here that we figured out how to win last year,” said Waiters, who after not playing at all in the fourth quarter of Saturday’s loss to the Celtics poured in a 39 minutes of work Monday.

“I think coming out of overtime we were just a little flat and we had to climb our way back,” he continued. “Once we put it together and understand we got to come out with that same sense of urgency. Like I said, it’s hard to win in this league so you can’t give teams like that with a lot of talent opportunities. I think we got to do a better job taking care of the ball.”

The Heat turned over the ball a season-high 24 times and finished 7-of-27 from three-point range, and got 23 points from Kelly Olynyk.

Jeff Teague led Minnesota with 23 points — 14 of which came in the fourth quarter or overtime — and Andrew Wiggins contributed 22 — 13 of them coming after halftime.

The Timberwolves were ahead in the final 11 1/2 minutes of regulation until Waiters’ 35-footer at the buzzer forced OT.

”There’s a lot of work for us to do defensively,” Timberwolves coach Tom Thibodeau said.

The Wolves next visit New Orleans on Wednesday, when the Heat host Chicago to end a six-game home-stand.

MIAMI, FL – OCTOBER 30: Jimmy Butler #23 of the Minnesota Timberwolves posts up Tyler Johnson #8 of the Miami Heat during a game at American Airlines Arena on October 30, 2017 in Miami, Florida.  (Photo by Mike Ehrmann/Getty Images)