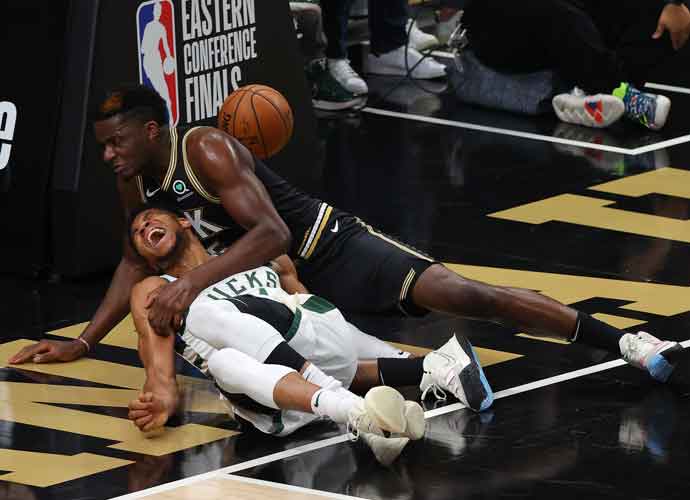 ATLANTA, GEORGIA - JUNE 29: Giannis Antetokounmpo #34 of the Milwaukee Bucks is injured against Clint Capela #15 of the Atlanta Hawks during the second half in Game Four of the Eastern Conference Finals at State Farm Arena on June 29, 2021 in Atlanta, Georgia. NOTE TO USER: User expressly acknowledges and agrees that, by downloading and or using this photograph, User is consenting to the terms and conditions of the Getty Images License Agreement. (Photo by Kevin C. Cox/Getty Images)

On Tuesday, the Atlanta Hawks easily cruised to a Game 4 win over the Milwaukee Bucks. The Hawks completed a 110-88 rout of the Bucks to even the series.

Heading into Tuesday’s game, the Bucks were the favorites to win it since Hawks’ star Trae Young was ruled out just before game time due to a fluke injury. Unfortunately for Milwaukee, they were unprepared for the scoring of Lou Williams (21 points) and Bogdan Bogdanovic (20 points).

The Hawks started the game with a quick 15-5 run that set the tone for Milwaukee’s shooting woes. Williams finished the first half scoring 13 points as Atlanta held a 51-38 lead at halftime. The Hawks never trailed; it was a wire-to-wire victory.

Five minutes into the third quarter, Bucks’ star Giannis Antetokounmpo left the game with an injury. Antetokounmpo jumped to contest an alley-oop from John Collins to Clint Capela. The star landed awkwardly on his left leg, buckling his knee. He remained on the floor for several minutes before being helped to the locker room with a noticeable limp. The two-time MVP scored 14 points in 24 minutes before leaving.

Giannis appears to have injured his leg.

“It just looked like their legs got tangled up,” Bucks coach Mike Budenholzer said after the game. “They both landed awkwardly. That’s what I saw live. I haven’t seen anything else.”

Milwaukee called it a hyperextended left knee injury. Antetokounmpo is scheduled for an MRI on Wednesday to determine the severity of the injury.

With Antetokounmpo gone, the Hawks extended their 10-point lead behind a 15-0 run as the Bucks remained scoreless for three and a half minutes. Jrue Holiday’s 19 points led the Bucks, and Khris Middleton added 16 points. Both players shot 6 for 17 from the floor. No other Bucks player reached double digits.

Milwaukee shot an abysmal 39% from the field as a team and 21% from three-point range on 39 attempts. On top of that, Milwaukee committed 15 turnovers that led to 16 points for the Hawks. The Bucks were unable to convert Atlanta’s mistakes into buckets. The Bucks scored just four points off Atlanta’s 11 turnovers.

With the series tied 2-2, the Eastern Conference finals shift back to Milwaukee, with both teams missing their respective superstars. Young and Antetokounmpo should each be considered questionable for the upcoming critical Game 5 matchup.