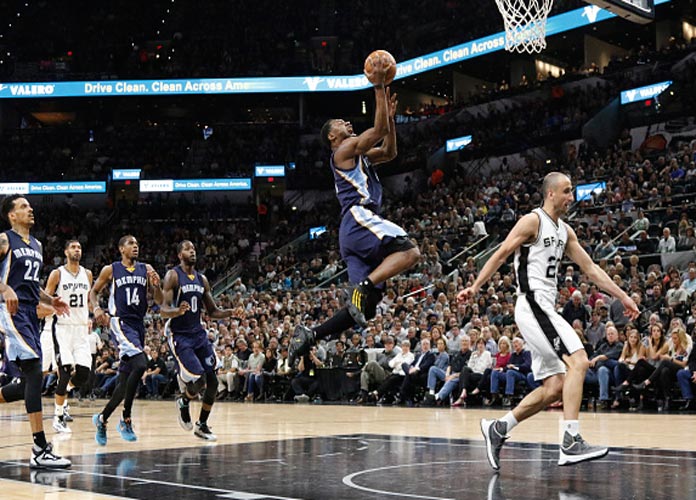 SAN ANTONIO,TX - APRIL 19: Tony Allen #9 of the Memphis Grizzlies on a breakaway in front of Manu Ginobili #20 of the San Antonio Spurs of game two of the Western Conference Quarterfinals during the 2016 NBA Playoffs at AT&T Center on April 19, 2016 in San Antonio, Texas.

Following their worst-ever playoff loss (106-74) on Sunday against the San Antonio Spurs, the Memphis Grizzlies fell a second time to the Spurs in a crushing 94-68 defeat in Game 2 of the NBA playoffs Tuesday night, thus matching their third-worst postseason deficit. The Grizzlies also reached a franchise playoff-low with 68 points on Tuesday.

“I mean, it’s tough,” Memphis forward Zach Randolph said. “But our whole season has been like that. Guys coming and going, injuries here and there. It’s hard.”

According to ESPN Stats & Info, the Grizzlies are the first team since the 2010 Milwaukee Bucks to fall short of 75 points in consecutive playoff games. Worse yet, Memphis is 0-16 all-time in the postseason when scoring less than 86 points.

Randolph led the Grizzlies with a game-high 12 rebounds and a team-high three assists but scored just 11 points in 30 minutes on 5-for-17 shooting, barely an improvement on his 3-for-13 showing in Game 1. Four of his points came in the fourth quarter, after Spurs coach Gregg Popovich had already retired his starting lineup to the bench.

“Tough night for us,” Memphis coach Dave Joerger stated, saying he was proud of his team’s effort. “I thought we battled. We were much better than we were the other night.”

There is no doubt that Randolph’s performance against the Spurs has declined over the years. In 2011, Randolph’s 31 points led eighth-seeded Memphis to a series-clinching win over the top-seeded Spurs.

Since then, Randolph has averaged 12 points on 35.7 percent shooting in 20 games against San Antonio, postseason included. This, coupled with the fact that both Marc Gasol and Mike Conley are out for the remainder of the season with injuries, leaves the Grizzlies with very little hope. Unfortunately for Randolph, it seems as though it is now up to him to carry the load.

In the last two games, Memphis’s starters have scored just 68 points and shot 33 percent from the field. According to NBA.com/stats, when the starting five of Randolph, Barnes, Anderson, Vince Carter and Jordan Farmar have been on the floor as a unit, they’ve shot 12-for-48 from the field and been outscored 51-30 over 27 minutes. The Spurs have also outscored the Grizzlies in all eight quarters thus far in the series.

The Grizzlies get the next few days off, one a practice day, then return to their own FedEx Forum on Friday for Game 3.

SAN ANTONIO,TX – APRIL 19: Tony Allen #9 of the Memphis Grizzlies on a breakaway in front of Manu Ginobili #20 of the San Antonio Spurs of game two of the Western Conference Quarterfinals during the 2016 NBA Playoffs at AT&T Center on April 19, 2016 in San Antonio, Texas.