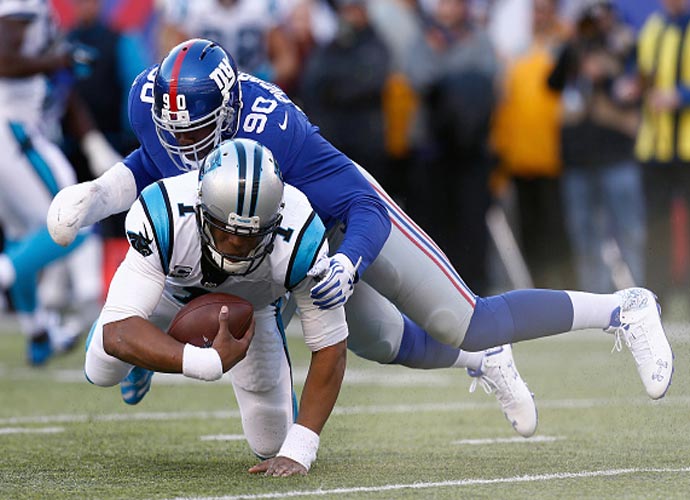 Caption:EAST RUTHERFORD, NJ - DECEMBER 20: Jason Pierre-Paul #90 of the New York Giants sacks Cam Newton #1 of the Carolina Panthers in the second quarter during their game at MetLife Stadium on December 20, 2015 in East Rutherford, New Jersey. (Photo by Jeff Zelevansky/Getty Images)

The New York Giants made two major announcements on Friday.

The #Giants and star pass-rusher Jason Pierre-Paul have agreed to terms on a multi-year contract, source said. Huge.

The #Giants and Jason Pierre-Paul, who agreed on a 4-year deal, have been through a LOT over the years. It took a lot of trust. Cool ending

The Giants and Jason Pierre-Paul have agreed to a 4-year deal expected to be about $17M/year with about $54M guaranteed, per @AdamSchefter. pic.twitter.com/jVa1iCa3e7

However, Pierre-Paul himself has expressed confusion over the news. The linebacker seemed visibly frustrated Friday morning when he took to Twitter to criticize the New York media for their blatantly false reporting.

“What the heck is people talking about I ain’t sign nothing,” Pierre-Paul tweeted. He then added: “That’s New York media for yah! They always want the story first and they got it wrong.”

What the heck is people talking about I ain’t sign nothing.

That’s New York media for yah!! They always want the story first and they got it wrong.

Just two weeks ago, the Giants franchise-tagged the star pass-rusher after Pierre-Paul said on Jan. 9— following the team’s playoff loss to the Green Bay Packers— that he refused to sign another one-year deal with the Giants.

Pierre-Paul signed a one-year, $10 million deal with New York last year after he struggled to recuperate his form following a July 4 fireworks accident in 2015 that severely injured his hand.

If the report of his new deal were correct, Pierre-Paul’s four-year, $68 million contract would carry the fourth-most total cash among defensive ends. It would also tie with teammate Olivier Vernon’s five-year, $85 million deal for the second-largest average annual value and contain the most guaranteed money for any defensive end in the NFL.

The Giants also announced on Friday that they expect to sign former Jets quarterback Geno Smith on Monday, pending a physical, according to Rapoport.

Smith, 26, tore his ACL midway through the 2016 season after the Jets’ other quarterback, Ryan Fitzpatrick, was benched by coach Todd Bowles. In an interview with Rapoport, Smith said he’s five months into a six-to-eight month recovery process, but is scheduled to be a full participant in training camp.

Smith will now serve as backup to Eli Manning, for whom the Giants have attempted to give a substitute for several years during the free-agency period. Over the past few off-seasons, the Giants sought for Buccaneers quarterback Josh Freeman to help then-backup Ryan Nassib. Now, the No. 2 QB spot is between Smith and Josh Johnson, who re-signed a two-year deal with the Giants on Friday.

The Giants will simply have to hope Smith fully recovers from his knee injury before the regular season begins, which seems likely given what he told Rapoport.

Caption:EAST RUTHERFORD, NJ – DECEMBER 20: Jason Pierre-Paul #90 of the New York Giants sacks Cam Newton #1 of the Carolina Panthers in the second quarter during their game at MetLife Stadium on December 20, 2015 in East Rutherford, New Jersey. (Photo by Jeff Zelevansky/Getty Images)