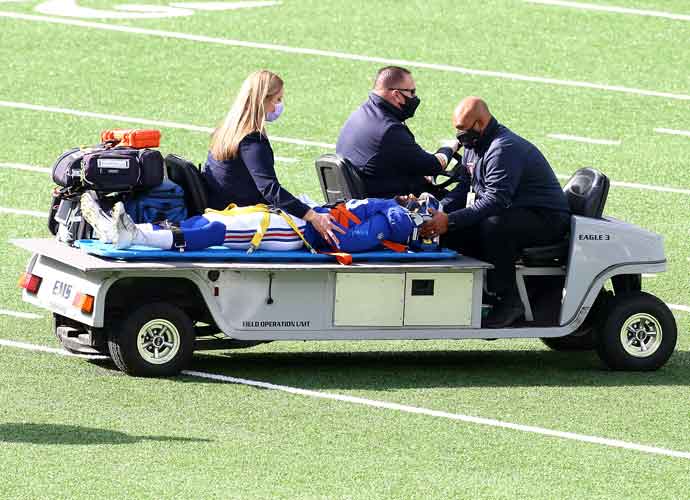 EAST RUTHERFORD, NEW JERSEY - OCTOBER 18: C.J. Board #18 of the New York Giants is carted off the field after being injured during the game against the Washington Football Team at MetLife Stadium on October 18, 2020 in East Rutherford, New Jersey.

After a scary injury during the New York Giants 20-19 win over the Washington Football Team, receiver C.J. Board was immobilized and carted off the field after an apparent neck injury, it has been reported that Board was released from the hospital on Monday. The fact that the team did not remove his helmet made people fear the worst, but he has been diagnosed with just a concussion and will not play during the team’s quick turnaround on Thursday night.

“Obviously, stuff like that is a little unnerving,” fellow receiver Darius Slayton said. “At the end of the day, at that point, you’re kind of almost playing, not in their memory, he didn’t die. You’re kind of playing for that person to some degree.”

This is another blow to the Giants whose skill positions have been decimated by injuries, most notably running back Saquon Barkley, who tore his ACL in week two. After a 1-5 start it is starting to become fair to ask when the team will just pack it in for the year and may look for an upgrade at quarterback by possibly drafting Trevor Lawrence.