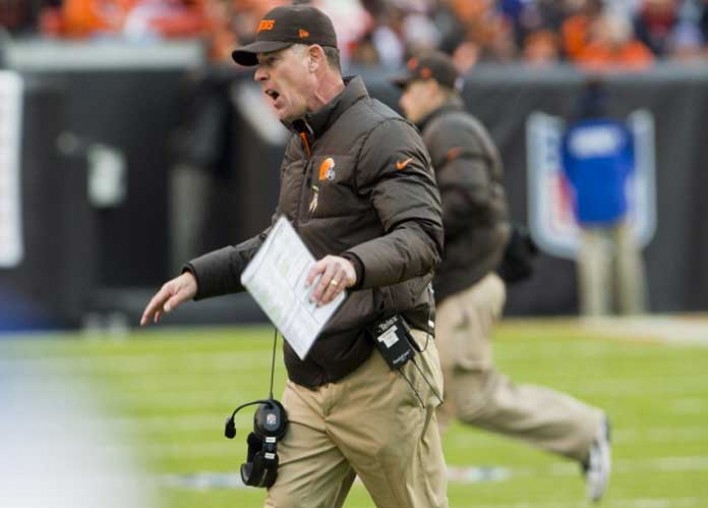 CLEVELAND, OH - NOVEMBER 4: Head coach Pat Shurmur of the Cleveland Browns reacts to a referee's call during the first half against the Baltimore Ravens at Cleveland Browns Stadium on November 4, 2012 in Cleveland, Ohio. (Photo by Jason Miller/Getty Images)

The New York Giants have been desperately seeking a new head coach to replace Ben McAdoo, who was fired in early December.

Big Blue finished the 2017 regular season 3-13 for the worst record in the NFC and second-worst in the NFL (behind the 0-16 Cleveland Browns).

The Giants are now reportedly down to three choices for their new coach: Minnesota’s Pat Shurmur, and New England’s Matt Patricia and Josh McDaniels.

Shurmur is the Vikings’ offensive coordinator and has been with Minnesota since 2016. He has previously worked for the Browns, the Philadelphia Eagles and the then-St. Louis Rams. He also worked as an assistant at Michigan State and Stanford.

Patricia and McDaniels, the Patriot’s defensive and offensive coordinators, respectively, have been rumored to leave the franchise amid rumors of rifts between the leaders at Gillette Stadium.

An explosive ESPN story from last week detailed one incident that occurred between McDaniels and Tom Brady during a December 2017 game where Brady failed to pass to a player McDaniels said was “wide open.” The coordinator and the quarterback allegedly proceeded to angrily exchange verbal jabs, according to the piece.

Patricia is the only one of the remaining three candidates who has no previous head coaching experience. Another person the Giants recently interviewed is Carolina Panthers defensive coordinator Steve Wilks. Wilks does not have any prior experience as an NFL head coach either, although he did serve as head coach for Savannah State in 1999. McAdoo — who was only in charge of the Giants for two seasons — also had no previous experience, so one can only assume that having a second consecutive rookie head coach is something the Giants are trying to avoid. Wilks would have been familiar with the Giants’ new general manager Dave Gettleman, a former Panthers executive who replaced Jerry Reese.

Nevertheless, NFL rules forbid the Giants from reaching a deal with any of their trop three candidates just yet.

CLEVELAND, OH – NOVEMBER 4: Head coach Pat Shurmur of the Cleveland Browns reacts to a referee’s call during the first half against the Baltimore Ravens at Cleveland Browns Stadium on November 4, 2012 in Cleveland, Ohio. (Photo by Jason Miller/Getty Images)