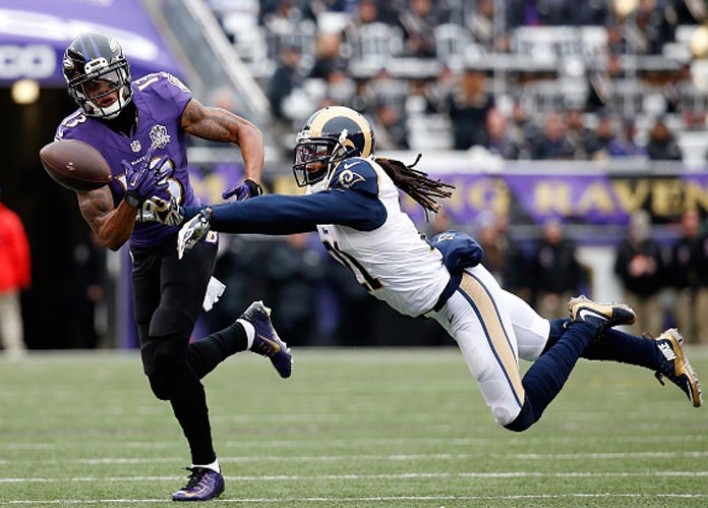 Caption:BALTIMORE, MD - NOVEMBER 22: Cornerback Janoris Jenkins #21 of the St. Louis Rams breaks up a pass intended for wide receiver Chris Givens #13 of the Baltimore Ravens in the second quarter at M&T Bank Stadium on November 22, 2015 in Baltimore, Maryland. (Photo by Rob Carr/Getty Images)

According to a source, the Giants will sign former St. Louis Rams cornerback Janoris Jenkins when free agency begins on Wednesday afternoon at 4 p.m. Jenkins, 27, will reportedly be paid $62.5 million over the course of the five-year contract, which would make him the second highest-paid cornerback in the NFL behind the Jets’ Darrelle Revis. The deal includes $29 million in guaranteed money.

Jenkins is arguably considered the top corner on the free agent market, and a fast, aggressive defenseman. He had three interceptions last season.

The deal comes as a bit of a surprise, given that almost everyone in the league believed the Giants would be more focused on acquiring pass-rushers. The Oakland Raiders were expected to be the favorites to lend Jenkins.

Jenkins will pair up with veteran Dominique Rodgers-Cromartie to give the team a pair of elite corners, something GM Jerry Reese has been attempting to achieve for several years now. After Rodgers-Cromartie joined the Giants in 2014, it was believed that he and Prince Amukamara would be that tandem.

However, Amukamara’s time with the Giants may soon come to an end because of health issues and inconsistent production over the past few years.

BALTIMORE, MD – NOVEMBER 22: Cornerback Janoris Jenkins #21 of the St. Louis Rams breaks up a pass intended for wide receiver Chris Givens #13 of the Baltimore Ravens in the second quarter at M&T Bank Stadium on November 22, 2015 in Baltimore, Maryland. (Photo by Rob Carr/Getty Images)