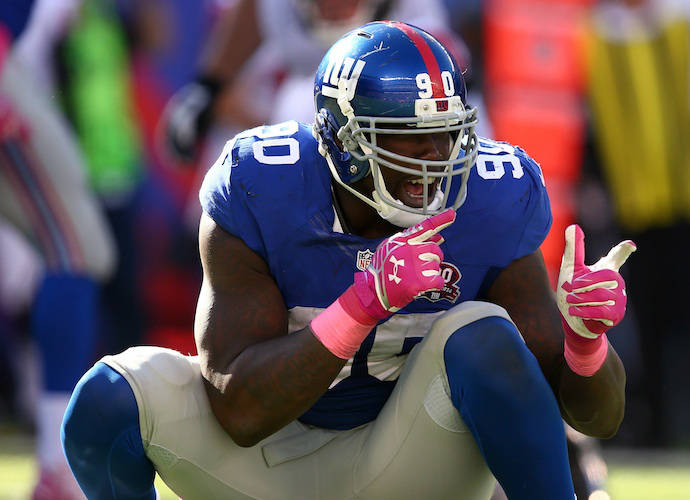 EAST RUTHERFORD, NJ - OCTOBER 05: Defensive end Jason Pierre-Paul #90 of the New York Giants reacts after a play in the fourth quarter against the Atlanta Falcons during their game at MetLife Stadium on October 5, 2014 in East Rutherford, New Jersey. (Photo by Elsa/Getty Images)

Although the New York Giants‘ defense has been performing well this season, most fans unsurprisingly want more, as the team remains at 2-3, in 4th place of the NFC East, its three losses coming consecutively.

Both players and fans know it’s not enough that Olivier Vernon— who is playing his first season with the Giants after spending four years with the Miami Dolphins– is playing the run better than nearly any defensive end in the NFL this season, and that Jason Pierre-Paul continues to put the type of pressure on quarterbacks consistent with that of a top 15 defensive end.

Each player has one sack this year, yet they are still not performing at the level many of the league’s top defenses historically have. Pierre-Paul stated Thursday what the Giants defense must do in order to succeed.

Pierre-Paul has been hindered by an injury to his hand: he lost some of his fingers in the summer of 2015 while playing with a firework that exploded during a 4th of July celebration.

The Giants still have much bigger issues defensively than their line. None of their linebackers are covering particularly well, and cornerbacks Janoris Jenkins and Dominique Rodgers-Cromartie have had unusually week starts as of late.

The defense has the third-worst third down-conversion-against rate in the NFL (45.7), and are allowing more than 20 first downs per game. Clearly, the Giants will need to make some severe improvements to their defense if they want to do better this season.

After coming off a loss to the Packers in Green Bay, the Giants will next host the Baltimore Ravens on Sunday.

EAST RUTHERFORD, NJ – OCTOBER 05: Defensive end Jason Pierre-Paul #90 of the New York Giants reacts after a play in the fourth quarter against the Atlanta Falcons during their game at MetLife Stadium on October 5, 2014 in East Rutherford, New Jersey. (Photo by Elsa/Getty Images)