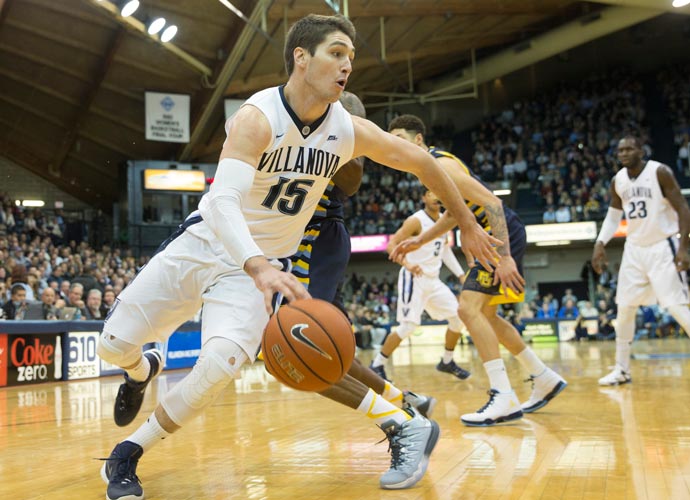 VILLANOVA, PA - JANUARY 13: Ryan Arcidiacono #15 of the Villanova Wildcats drives past Traci Carter #21 of the Marquette Golden Eagles on January 13, 2016 at the Pavilion in Villanova, Pennsylvania. (Photo by Mitchell Leff/Getty Images)

First he helped secure Villanova’s first National Championship in over 30 years, and the second in the school’s history and now Ryan Arcidiacono will be taking his talents to San Antonio next season.

Arcidiacono signed a two-year deal with the Spurs Thursday, according to reports on Friday.

The contract is said to be the neighborhood of $75,000, a common figure for players looking to work their way onto the roster via summer league or developmental league performance.

There are reported roster bonuses built in that will have Arch seeing more money as long as he stays on his current level of performance.

Averaging 19.4 minutes per game in Las Vegas, the former Wildcat has posted averages of 2.4 points, 2.7 rebounds and 2.3 assists per contest. He is shooting 34 percent from the field and 33 percent from the 3-point line in seven summer league games.

Source: Spurs sign Ryan Arcidiacono to a multi-year deal. He’s guaranteed $75,000 with trigger dates for more guarantees this season & next.

San Antonio extended a warm welcome to the Bucks County, Pennsylvania native, posting a banner beside his photo on Twitter that read: “Welcome Ryan Arcidiacono.”

A 22 year-old guard, Arcidiacono took home Big East Player of the Year honors in Villanova’s magical season, scoring 16 points to help set up the game-wining buzzer-beating 3 with an assist to Kris Jenkins.

He also has a cousin who plays tight end on the Rutgers football team. A lot of young talent in that family.